This is great news! I credit the Mountain View city planners of the 1970s and 1980s. While I didn't live here then, I have seen photos of what downtown used to look like. Castro Street used to have two lanes of traffic in each direction. There was very little space for pedestrians and none for outdoors restaurant seating. It didn't look like a place you'd want to go for a meal or to shop. But then they made it pedestrian-friendly (and added off-Castro parking) which laid the groundwork for today's nicer downtown.

Old-time Mountain View residents: do you agree with my conclusions or did I get the wrong idea from the photos I saw?

I remember when Castro Street was four lanes and traffic was bad then. I thought the city was crazy narrowing it down to two lanes. I take it all back. I love downtown Mountain View so much I moved there! I love the people, the neighborhood, it's so wonderful to walk and ride my bike everywhere. I shop as much as possible in downtown Mountain View.

Many downtowns with metered parking were killed by shopping malls with ample free parking.

It's just amazing that they would seriously consider charging for parking. If it ain't broke don't fix it. It seems every solution the city counsel comes up with either involves more public safety officers or raising fees. Take a look at downtown San Jose. On a weekend night the entire area is flooded with cops, pay lots, and empty venues.

Max Hauser is a registered user.


"Jes' Sayin'" understates the number of restaurant closures, and yet even allowing for that, presents a gross misimpression of downtown restaurant history in recent years.


Yet in the same area over the same period, around EIGHTY new restaurants opened (including many listed above that later closed). That's a success rate FAR above industry average, and it has left our downtown a "destination" region for diners from surrounding towns, including several unique highly regarded establishments whose reputations extend far beyond MV.

Please DO NOT start charging for parking! Our beautiful and popular downtown would NOT be so popular with parking meters and the need to feed them. It would also add another couple of employees to the payroll to check and empty them...and then there is vandalism to meters. Bummer of an idea all the way around!

Well some one has to pay for city hall's fat pensions. Old boy Duggan just can't retire on less than $250,000 a year, although better people do more with less.

Observer, it has nothing to do with Pensions. Personally I am against pay parking too. But there are only two choices: build more garages or charge for parking and encourage people to turn over the spaces. If you build garages, it will STILL cost you, just in other ways. So not a fun choice, but you can keep the bitter assessment out of it.

If the issue truly is parking turnover, the only solution will be more parking. Or better public transit. Or higher gas prices (those are assured...) However, at the times when parking is full - usually dinnertime - the success of all the restaurants is what is filling the parking. Charging for it won't get people to eat faster, but it will get them to leave Mountain View sooner after eating, cutting down on store and other business revenue. If revenue is truly the issue, let's celebrate that a lot of our facilities are paid for by our own residents, and give them a free parking pass, so that only outsiders are charged.

Report Objectionable Content
Email Town Square Moderator
Posted by Bill Lindemann
a resident of Stierlin Estates
on Nov 16, 2011 at 7:35 am

The parking issue is a clear example where government taxation of business has a definite place, namely when it directly benefits those businesses. Can the city of Mountain View create a special assessment district for downtown businesses to finance a new parking garage?

Currently it's fashionable to say that taxes are just passed on to the consumer. Businesses do have an alternative -- move to a shopping mall with "ample free parking". But that parking is not free. It costs money to build and the mall passes that on in its rent, which is then passed on to the consumer. Same thing, except private industry, rather than government is charging the fee. But if government contains costs, it could provide parking at a competitive rate. Those restaurants clearly like the downtown location. It brings in customers. Why shouldn't they share the cost of parking, just as they would have to in a privately-owned shopping center?

Interesting discussion here on the possibility of paid parking downtown.

I appreciate the last few posters' comments, as they highlight some of the trade-offs and nuances in the parking issue.

I'd just like to add two thoughts -
First, introducing paid parking in downtown Mountain View would NOT necessarily mean old-school parking meters. There are lots of good examples now, as nearby as Redwood City, where cities introduce paid parking and use smart meters/boxes that can accept credit and debit cards, and even pay-by-cell phone which allows you to add time to your meter remotely so you don't have to go back and 'feed the meter.' These technologies can help ease the impact of charging for parking.

Additionally, nowhere does it say that you have to charge for parking everywhere if you introduce paid parking. You can charge for the most attractive/closest spots, while leaving other options (e.g., farther away lots) free. Again, we have to look no further than Redwood City to see a well-done example. This gives patrons a choice - pay for the convenience, or walk a bit farther if you're price-conscious. Given that the City is paying major $$$ to provide free parking now (in land costs, maintenance costs, and opportunity costs) I would think a free-market approach like this makes a lot of sense.

Andrea Gemmet is a registered user.


The following comment has been moved from a duplicate thread, which is now closed:

Sure, why not have a city-run grocery store downtown. In an ideal world the city would run everything - groceries, parking, and maybe a good restaurant - that will need taxpayer support soon too because there won't be enough parking for people to be able to get close. This of course goes well in hand with the 20 million of taxpayer dollars already committed by the city to replace perfectly useful downtown parking with government-run housing projects. Delicious. Feed the out-of-town developers. From the 99% to the 1% in the name of do gooding!
by Downtown neighbor Nov 16, 2011 at 9:21 pm

The Fish Market to remain in Palo Alto despite sale of property to developer
By The Peninsula Foodist | 8 comments | 4,685 views

Memo to PA Police Chief Jonsen: What are you hiding from us? And why?
By Diana Diamond | 28 comments | 1,928 views 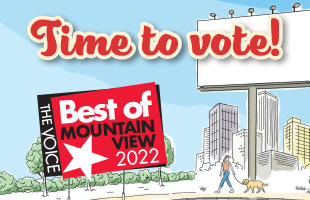 It's time once again to cast your vote for the best places to eat, drink, shop and spend time in Mountain View. Voting is open now through May 23. Watch for the results of our Best Of contest on Friday, July 23.