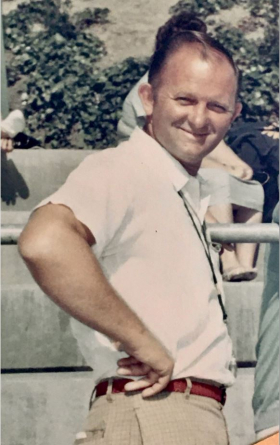 He was born on November 10, 1932 in Palo Alto California during the Depression. His parents were Dorothy and John Williams whose families immigrated to the United States from Wales and Scotland. His grandfather John McLachlan was a mason who helped build the Stanford Chapel at Stanford University.

John attended Addison Elementary School and graduated from Palo Alto High School in 1952. After high school, John enrolled in the Citadel of South Carolina and after an epic cross-country trip and one year attending the Citadel, he decided to return to Palo Alto and enroll at San Jose State University. He graduated with a BA in Physical Education.

While at San Jose State, John founded the Palo Alto Swim Club in 1955 which years later merged with several teams to form PASA. He gave local age-group swimmers a place to train where there were no options nearby at the time. He also founded a diving club and women's water polo team, as well. The diving club lasted nearly 12 years. The water polo club competed just three years but earned national notoriety by taking second and third in two U.S. national championships. Palo Alto also hosted two national swim meets at Cubberley High School in the 1960s.

After graduating from San Jose State, John took a position with the Palo Alto School District as a Physical Education teacher. He taught at several district schools and eventually took a position at his alma mater, Palo Alto High School. During his career with the district, he was often referred to by the nicknames Willy and Yoda.

He met and married Linda Price Williams, the love of his life, in 1959. They honeymooned in Carmel. While raising their three children, John spent many hours every day working more than one job. Either before dawn or after a full day of teaching in the district he could be found lifeguarding at the Elks Lodge or coaching at Palo Alto Swim Club.

At Paly he taught PE, Drivers Ed, several other classes and coached multiple sports with a focus on Swimming and Diving. He had a long and satisfying career as a coach and ultimately took the Athletic Director position. His final years before retirement were marked with Paly winning its first CCS Football Title in 18 years and multiple sports including Swimming, Basketball, Badminton, Wrestling and Tennis winning division titles and state championships.

In retirement John loved playing golf, tennis doubles, living in the Del Webb Lincoln Hills retirement community, enjoying the company of their wonderful neighbor’s wine group in the park, traveling to Hawaii and abroad to places such as Germany, New Zealand and France. They also spent many vacations touring the US in their RV and spending time with family in Blue Lake Springs, Arnold CA. John also enjoyed Hawaiian music and listening to his vinyl records that included his parents' collection of oldies but goodies. He especially enjoyed having a new Alexa recently so he could easily ask her to play anything he wanted!

John was a quiet spoken man who loved visiting with close friends, spending time with them in Hawaii and other locations in the US, going out for a good meal (especially breakfast at Dinah's and The Waffle Farm) and gardening at his home in Lincoln. He and his wife Linda spent many enjoyable hours together working in their garden and enjoying their children and grandchildren’s company. Linda called him Saint John and his children thought of him as the Rock of Gibraltar for his quiet but strong sensibilities. He could often be heard saying “Don’t worry about it!” when advising loved ones on the stresses of life.