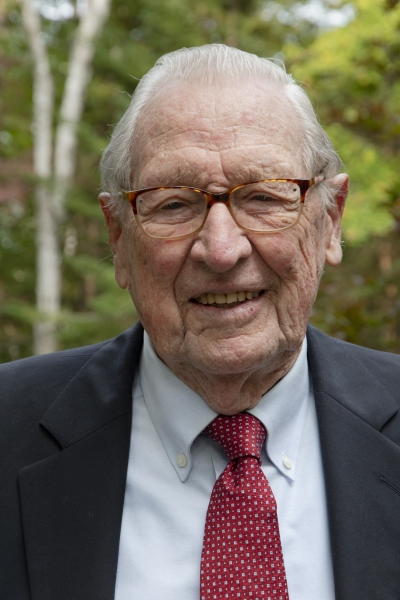 William James “Bill” Graham died on November 24, 2020, near his home at Fox Hill Village in Westwood, MA. He was born to Margaret Euwer Graham and John Ellis Graham on September 20, 1923 and raised in Pelham Manor, NY with three brothers: Jack, Malcolm, and Bob (only Bob is still living). Bill graduated from Pelham High School and attended Columbia University for one year before he transferred to Amherst College. He enlisted in 1943 and saw action in Luzon, Philippines as an infantry officer. He returned to Amherst and graduated cum laude in 1948. He was called back into service in 1950 and served as the Training Officer at Camp Gordon, GA.

Bill met Natalie Stolk at a wedding in 1950, and they married a year later. They had seven children: Jimmy, Susan, Margaret, John, Betsy, Joannie, and Cathy. Bill and Natalie were married for 68 years. Natalie predeceased Bill by 10 months, and their first child, Jimmy, died in 1957. They will all be buried together in New London, NH, as will their other children and spouses.

Bill started his business career at Bigelow-Sanford Carpet Company. He joined Owens-Illinois, Inc. in 1953 as a sales trainee and worked for the company for 33 years. By the end of his tenure, he had managed all of the key divisions at O-I, including Glass Container, Plastics, Lily Tulip, and Closures. He also successfully negotiated the nation’s first bottle bill in the state of Oregon in 1972. He was active in various industry-affliated groups, like the Management Policy Council, Plastic Bottle Institute, and the Society of the Plastics Industry. He joined GW Plastics, Inc. as a Director in 1983 and was an active and enthusiastic member of their board until the company was sold in 2020.

Bill was a fierce competitor; sports was a big part of his life and character and the basis of many of his friendships. He taught himself to play tennis at age seven and played for the next 80+ years. He was captain of the Amherst tennis team and played competitively until an injury took him out of the tournament circuit. When Bill stopped playing, he was ranked #2 in the United States by the USTA (in his age group). Although tennis was his favorite sport, golf was a close second. He belonged to a golf club wherever he lived, and played often, especially after he retired. He had two hole-in-ones (after the age of 80), one at Menlo Country Club in CA, and one at Eastman in NH.

The Grahams lived in both Toledo, OH and in the San Francisco Bay Area, CA (twice each). In CA, Bill was on the boards of Filoli Historic House and Garden, Portola Valley Ranch, San Francisco Botanical Garden at Strybing Arboretum, Menlo Country Club, and Foothills Swim and Tennis Club.

Bill and Natalie traveled often for both pleasure and work. Every other year, they would convene their burgeoning family to a warm-weather spot where they could be together and form the strong bonds that still connect them today. His 12 grandchildren (Haydn, Whitney, Willie, Aidan, Elle, Sarah, Alex, Conor, David, Carolyn, Annie, and Grace), devoted to him and to each other, called Bill on Zoom every Sunday once the pandemic hit, and in-person visits were no longer allowed.

Bill and Natalie moved to Fox Hill Village in 2012 to be closer to family and to New Hampshire, where they had a family gathering place. Their years at Fox Hill were happy ones, and the friendships they made there enriched their final years.

It is fitting that Bill died with the Wall Street Journal open on his lap. He had an insatiable appetite for business and finance (and sports and cars), but mostly he loved his family: Natalie, their seven children, twelve grandchildren, and three great grandchildren (Frances, Tadeusz, and Moses)—so far.

A memorial service has been planned for January, 2021. In lieu of flowers, donations can be made in Bill’s name to The Greater Boston Food Bank or the Ecumenical Hunger Program (EHP). To share a memory of Bill, please visit www.eatonfuneralhomes.com