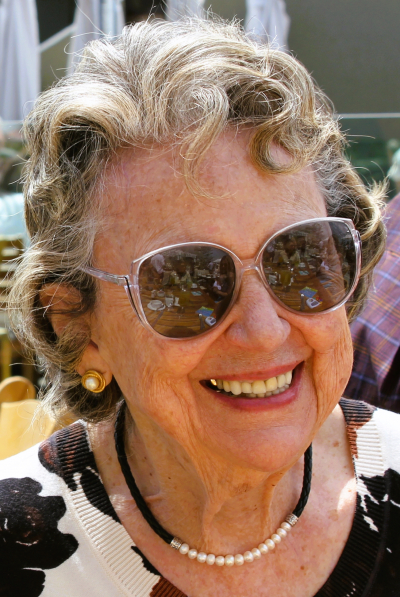 After a lifetime of steadfastly serving her family and community, this long-time Menlo Park resident peacefully passed away a few weeks after her 95th birthday at Atria Park of San Mateo. Virginia Vlack Tedrow was born on Saint Patrick’s Day- a most befitting birthday for this angel-in 1927 to Joseph Bernard and Margaret Whitlock Vlack in Chicago. As the daughter of a career Army officer, Virginia crisscrossed the country and attended four high schools in Chicago, Galveston, Riverside, California and Wilmington, North Carolina. At the University of Chicago she met her husband-to-be of 64 years, James Woodhouse Tedrow. They graduated the same day; she with a BA and he a JD. They married a week later and in quick succession produced three daughters: Ainsley, Hilary and Leslie. The young family moved to Menlo Park, California in 1962.

In addition to raising three small children, Virginia began an admirable career of community service that spanned over 60 years and of which she was immensely proud. In Chicago, she served as a board member of Florence Crittenton Anchorage for Unwed Mothers, Illinois State Commission on Maternity Home Standards, and the Junior League of Chicago for whom she chaired several committees and edited the magazine. Following the move to Menlo Park, Virginia served on the boards of and held numerous other leadership positions with the Community Council of Northern Santa Clara County, Peninsula Auxiliary of San Francisco Crittenton Home, the Palo Alto Mental Research Institute, and the Junior League of San Francisco and Palo Alto/Mid-Peninsula. She was particularly drawn to helping others with reading and speaking challenges and dedicated over 34 years of service to Learning Ally (formerly known as Recording for the Blind and Dyslexic) for whom she served as Chairperson and performed almost every other leadership role possible including fundraising.

Virginia and Jim loved an adventure and travelled extensively visiting over 45 countries. Their particular interest in archeology took them off the beaten path to places like rural Thailand, Turkey, Antarctica and Guatemala where they summited Temple IV, one of the tallest Mayan structures in Central America.

A voracious reader, gifted writer and correspondent, with a keen intellect and Jeopardy-worthy memory, Virginia is most cherished and remembered for her kindness and selfless giving of herself to her husband, children, countless friends, and community service colleagues and recipients. Her life is best described with her own words: “What a wonderful life I’ve had. I was blessed with a dear husband who truly loved me; with three wonderful daughters-each one of whom makes me proud-three splendid grandchildren and three precious great-grandchildren, a satisfying legacy. What more could anyone ask for.”

Photo Gallery
0 photos Upload a photo
Remembrances
0 entries Submit a remembrance
Make a donation
The family welcomes online donations in Virginia’s memory to https://www.LearningAlly.org.
About this site     Contact us