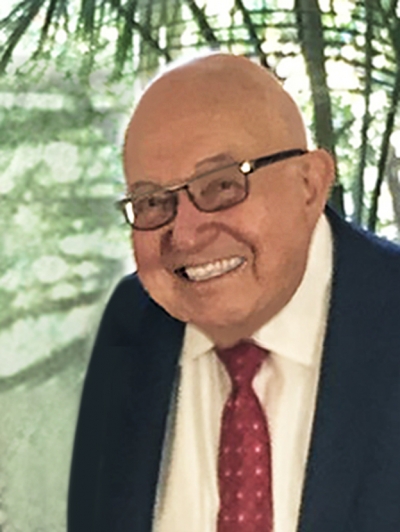 Sarkis Kouzoujian of Belmont, California was born in “The Bronx,” New York on April 18, 1933 to Harry and Vartouhy Kouzoujian, survivors of the Armenian Genocide. Sarkis joined them in God’s kingdom on Christmas Day, December 25, 2020, from complications due to COVID-19. He is survived by his loving wife of 62 years, Seda, son Van, daughter Karen, and grandson Jack.

Early on, Sarkis realized his passion for technology. He attended Samuel Gompers Technical High School where he excelled in the emerging field of radio and television technology and design. This would form the foundation for his future in the evolving field of data processing and the birth of micro-computers. Sarkis’ desire for lifelong learning fostered an open mindset and was the backbone to his positive and optimistic nature, and a belief that anything is possible. Contrary to prevailing workplace practices at that time, as more women entered the field of technology, Sarkis was an innovator in demanding equal pay for the women in his department.

Through his active involvement in the greater New York Armenian community, Sarkis met the love of his life, Seda Katchouny. They married in 1957 and established their home in Flushing, NY. Shortly after the arrival of their children, Van and Karen, Sarkis pursued his academic degree in Engineering from Farleigh Dickinson University, working during the day, going to school at nights. He was selected to be a member of an elite group that designed the depository trust system for the NY Stock Exchange. In 1973, this led to an opportunity in San Francisco to work for the Pacific Stock Exchange. The entire family moved, including his mother and mother-in-law, to the San Francisco Bay Area to start a new life in California.

With an entrepreneurial spirit and a keen awareness of the dawning of the micro-computer era, Sarkis followed his dream and opened one of the nation’s first personal computer stores, ComputerLand, in 1978, with additional stores to follow. Recognized as a pioneer in the industry, Sarkis was asked to participate on the advisory boards of both IBM and Apple Computer. After the sale of the business in 1986, Sarkis leveraged his decades of expertise by providing consulting and advisory services to businesses on implementing their computer systems.

Sarkis was a very spiritual man and gave back to his Armenian community and church. He was a member of the Knights of Vartan, an Armenian philanthropic fraternal organization, where he was honored as “Man of the Year,” served as Commander of the local chapter, and was a member of the national executive board. Sarkis also served on the parish council of St. John Armenian Apostolic Church in San Francisco, on the executive board of NorCal Senior Services, and was actively involved with the Armenian General Benevolent Union (AGBU).

Sarkis valued his family and friends above all else and was loved by all who knew him. He would always make himself available to individuals or organizations needing any of his wide range of skills. He will forever be known for his loving and giving nature, warm and broad smile, the twinkle in his eyes, and his roaring sense of humor. He had a passion and love for travel, crossword puzzles, and exploring the unknown.

The family has chosen to defer a celebration of Sarkis’ life until we can all gather together safely to honor him. To memorialize Sarkis’ love of technology and enthusiasm to inspire the next generation, the family has set up The Sarkis Kouzoujian Scholarship fund, with the AGBU at 55 E. 59th St, New York, NY 10022.

Sarkis will forever be in our prayers and hearts!