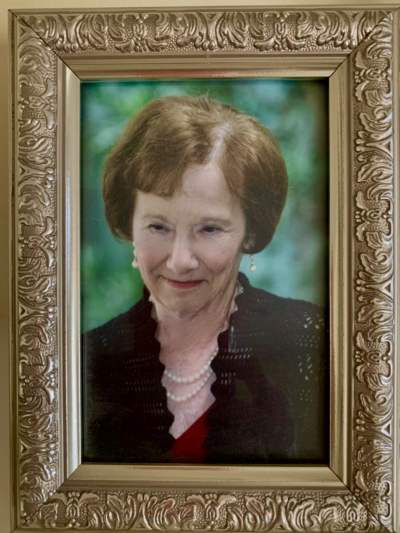 An upcoming Memorial will be held in October in Sausalito, California for Roslyn "Rose" Gray who passed in on July 9th 2020, after a long battle with Alzheimer's. Our Mom was a long-time resident of Palo Alto, and in her heart, this was her one and only "home."

She is preceded in death by her dear mother, Mae Morgan Gross, and two older sisters: Lois Mae Grossman, and Doris Gross.

Born in 1926 in Scranton, Pennsylvania, she was the second to youngest of four sisters, all blessed with musical talent from their mother Mae and her Uncle Russ Morgan. Their cherished mother, Mae Morgan Gross was an exceptional pianist and organ player for local churches. While Rose played a mean piano, she was more comfortable as a "bookworm". So, right after high school, she set her sights on a nursing Degree. Her dream came true during WWII, when she was "capped" as a R.N. during times of great need for the country. It was not all work, as her "service to her country" included trips to USO dances with her younger sister Shirley Lieberman, a pinning to a West Point Cadet prior to deploying, and of course, caring for the needy in Philadelphia.

At only 20, she took a a cross country trip on the train to visit her sister Doris Gross in Loomis, CA. While vacationing, she met her husband of 20 years Edward E. Gray, a 6'3" young Stanford Engineering student who swept her off her feet. She never returned to the East Coast, instead marrying, utilizing her Nursing Degree to put her husband through Stanford, and finally ending up starting a family Palo Alto in the mid 1950's. Ed introduced her to sailboat racing on San Francisco Bay, skiing, and a love for the academia of the Palo Alto community. Together they had three daughters: Susan Gray, Pamela (Gray) Richman, and Regina (Gina Gray) Baffo, all of whom attended Crescent Park Elementary, Jordan Junior High, and Paly High School consecutively.

After her children were out of Elementary School, Roslyn returned to her studies, where she was awarded her master's degree in Psychiatric Nursing from UCSF. She found a need at the VA Hospital in Palo Alto and worked with Veterans until she moved from the Bay Area.

Rose lived an amazingly complex life. Truly devoted to nature, she became a a member of the Palo Alto Ski Club, and Charter member of the Palo Alto Sierra Club, where she sat on the Executive Board. She was a regular attendee of City Council Meetings to keep the Baylands and the natural scenic beauty of Palo Alto preserved and campaigned for Early Women Candidates for Palo Alto City Council, including Enid Pearson. Her love of nature led her to become an avid hiker. When others her age were going on glamorous vacations, she chose travelling to Nepal for a trekking trip, family ski trips to Squaw Valley, hiking and biking adventures in Yosemite, The Grand Tetons, and the Sierras.

Mom was blessed with four grandchildren: Maxwell C. Richman, Nicoletta F. Baffo, Christian S. Baffo, and the last born while she was in her late 70's, Madison E. Richman. It was the urge to be closer to her grandchildren that led her to leave her beloved Palo Alto, with its gorgeous Magnolia tree lined streets, amazing parks, (including her favorite Foothill Park), her long walks with her dogs along the Baylands planks, and of course, the occasional visit to the Cheese House!

In early 2010, she relocated to San Marino, and enjoyed being close to her grandchildren where she attended Nikki's ballets, Christian & Madison's gymnastic meets, Max's baseball games, and even found her love again for Max's Friday Night Lights & College Football games!

Rose is survived by her youngest Sister, Shirley Lieberman, three daughters and 4 grandchildren, as well as many nieces, nephews, and cousins.

Rose passed on 7/9/20 from complications of Alzheimer's Disease and was an unwitting participant of the "Covid" shutdown. We will be celebrating her life at a small family Memorial in Sausalito, on the San Francisco Bay where she loved to race. She was small but mighty, and in her true heart, she was quiet, shy and a beautiful woman. Will miss you always: Rose, Rosie, Roslyn, Aunt Rosie, Mom, and (her favorite) …Nana.

Photo Gallery
0 photos Upload a photo
Remembrances
0 entries Submit a remembrance
Make a donation
Donations for Alzheimer’s research can be made through a Tribute Page under Roslyn “Rose” Gray, or through this link at the Alzheimer’s Association: http://act.alz.org/goto/Roslyn_Rose_Gray.
About this site     Contact us