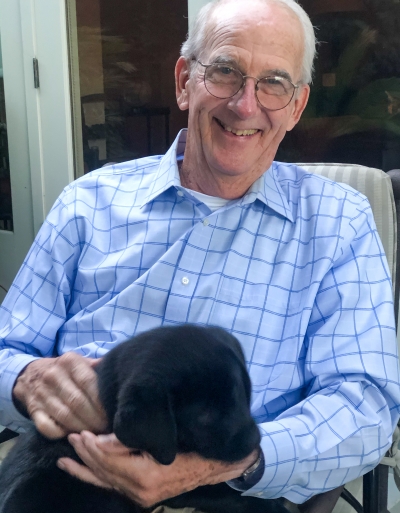 Long-time Menlo Park resident Bob Shenk peacefully passed away at his home on Sunday, January 10, 2021. Bob had been suffering from symptoms related to lymphoma.

Bob was born on February 7, 1940, at Palo Alto Hospital to Samuel and Sally Shenk. The second of three children, Bob enjoyed growing up in the Ingleside Terrace area of San Francisco. He was a 1957 graduate of Lick-Wilmerding High School and later attended Purdue University, where he earned a bachelor’s degree in 1964.

Bob married Mary Catharine Dolan on September 12, 1964, in San Francisco. Bob first met Mary when he was 9 years old, and they celebrated 56 loving years of marriage before his passing. Bob and Mary soon settled in a home in Menlo Park, California – a house they lived in together for the next 52 years.

Bob first worked for Cincinnati Milacron, a leading CNC machine tool producer, where he was named Salesman of the Year in 1970, 1974, and 1976. He later showed his entrepreneurial talent in forming Shenk Tool Gauge, which produced a series of useful diagnostic tools. Later, Bob set out on his own and started Shenk Machinery. It was here that his prowess as a machine tool salesman shined most brightly. Bob loved supporting the manufacturing needs of leading companies in the Bay Area to include Apple, Tesla, FMC, and Intuitive Surgical.

Despite his many professional achievements, Bob never let work get in the way of family. He coached his children’s baseball and basketball teams, cheered his grandchildren from the stands, and was ever-present for performances and graduations. Bob was famous for leading backpack trips into the Sierras and enjoyed fly fishing with his brother John and his family.

Bob was a remarkable carpenter who created furniture, toys, boats, and wooden works of art that his family will treasure for generations.

Bob and Mary were longstanding members of Menlo Church (Menlo Park Presbyterian Church) and were active in the Menlo Park community. Always a gregarious man, Bob made friends easily and stayed close to many of his childhood buddies throughout his life.

Bob is survived by his wife Mary and his three children and their spouses - Rob and Tracey Shenk, Carrington and Steve Kujawa, and Charles and Sarah Shenk. He will be deeply missed by his seven grandchildren, family, countless friends, and so many others. And if one’s wealth was measured in love created, love shared, and friends made, Bob would be the richest man ever. Now it is up to all of us to carry his love and memory forward.

Photo Gallery
0 photos Upload a photo
Remembrances
0 entries Submit a remembrance
Make a donation
Memorial donations may be made to Peninsula Open Spaces Trust (POST) Link: https://openspacetrust.org/donate/
About this site     Contact us