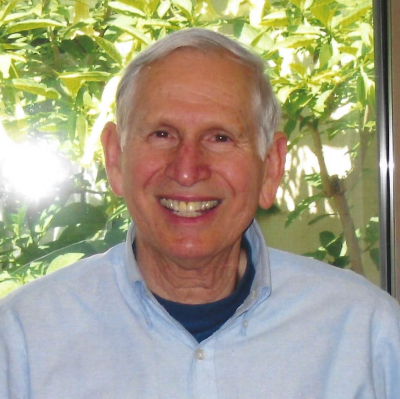 Richard passed unexpectedly and peacefully at age 83 surrounded by loved ones at his family home in Palo Alto. His parents John and Lucy, originally from Mexico, met in San Francisco where Richard was born, and they raised their family in Palo Alto. As parents, they taught their children, “primero Dios,” that is, God first.

Richard attended St. Thomas Aquinas grammar school in Palo Alto, Serra High School in San Mateo, and got his bachelor’s degree in political science from St. Mary’s College in Moraga. From his sophomore to senior years at St. Mary’s, he was part of a singing group called “The Strangers” who recorded hits, appeared on television dance parties, toured the country, and opened concerts for major singers Connie Francis, B.B. King, and The Diamonds.

Richard served in the Peace Corps as an English teacher in the Dominican Republic from 1962 to 1964 where he met his future wife, Edda Tavarez. They settled in Palo Alto and had two sons, Richard, Jr. and John Edward. Edda had a delightful voice, wrote music, and played the guitar and we enjoyed hearing them sing together. The family often traveled to the Dominican Republic to visit relatives and friends. They were happily married for 32 years until her untimely death in 1998.

Over the years, Richard worked in many interesting positions including Director of Foster Parents Plan for the country of Ecuador, Senior Administrator at UC Berkeley, and Code Compliance Officer for the City of Palo Alto. He also loved serving others through volunteer work, for example, making home visits for the St. Vincent de Paul Society in East Palo Alto, being a founding member of the Palo Alto Farmers Market, leading children’s tours at Hidden Villa Farm in Los Altos, and spending time with those in need at the Palo Alto homeless center.

Richard was known for his beautiful smile, kind and uplifting spirit, deep spirituality, and sense of fun and adventure. He constantly prayed for others and was a long-time member of St. Thomas Aquinas Parish. Before he was married, he hitch-hiked across the United States. He loved nature be it climbing Mission Peak, walking at the wetlands, or enjoying the flowers and butterflies in his peaceful backyard sanctuary. For many years on his birthday, he hiked on his own leaving at 4:00 a.m. from Palo Alto over the mountains to Half Moon Bay. He also biked to Yosemite and Santa Cruz on his three-speed bike. He was a legend in his time.

Richard is predeceased by his parents, brother Johnny, wife Edda, and son Richard, Jr. He is survived by his son John Edward and sister L. Susan Cabrera.