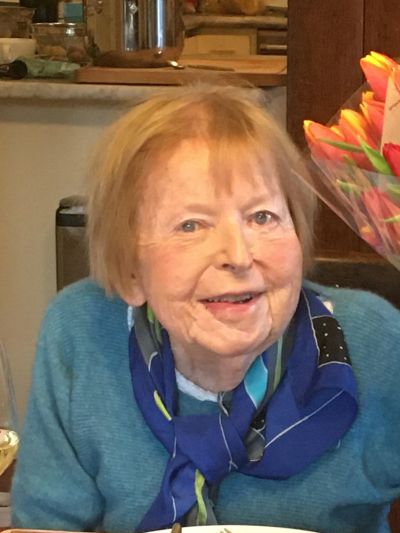 Cynthia Roberts – a resident of Menlo Park for nearly 65 years -- passed away on June 27, 2022 at the Brookdale Senior Living Facility in Redwood City, California. Born in Milwaukee, Wisconsin on April 5, 1928, she was the third of six children of Anita and Frederick Brenk. She attended Marquette University and graduated from the University of Wisconsin, Madison. She soon moved to Sausalito and San Francisco, where she met her husband of many years, Kenneth Roberts (who pre-deceased her). They were married in 1957 and she moved to Menlo Park to join Ken and his three daughters, Elizabeth, Katherine, and Susan (now deceased).

Cynthia is remembered as a dedicated member of the League of Women Voters and as a supporter of Visiting Angels. She volunteered for many years at the Cantor Arts Center at Stanford and was an artist in her own right, creating beautiful sculptures in both wood and stone. She also spent many hours on the ski slopes and swimming laps in her favorite pools.

Services will be held at Nativity Church, Menlo Park, on July 5th at 11 AM.