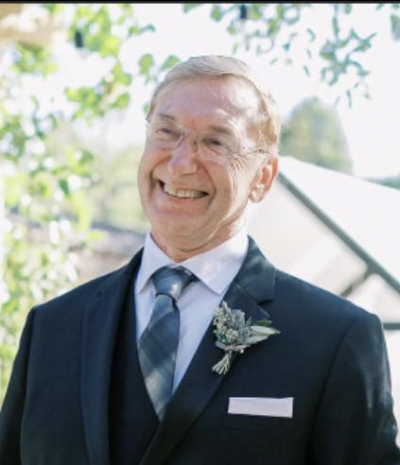 On Wednesday, August 24, 2022, Chris Alan Lykke, loving husband, father, and grandfather, was called home to the Lord at the age of 71. Chris was born January 20, 1951, in San Mateo, Ca. His father Donald Eugene Lykke was a pilot for Pan Am and his mother Bernice Hazel Clausen (Lykke) was a homemaker. Chris enjoyed his childhood growing up in Saratoga, Ca. He enjoyed playing many sports with his friends from childhood and into high school.

He graduated from Saratoga High School in 1969, and he went on to Cal Poly San Luis Obispo where he earned a degree in Statistics while pursuing a love a music through his participation in the Collegian Stage Band. Chris then attended UC Davis for his Master’s degree in Statistics while working in the medical school there and co-authoring a paper on heart disease. While he wasn’t a fan of the statistics program at Davis, he did find the love of his life, Mary Jane Glaser. He won her over with a “frozen turkey dinner”. Mary Jane and Chris were married August 9, 1975 and started their life together in Oklahoma where Chris continued his education in the pursuit of his Doctorate of Biostatistics at Oklahoma State University.

After graduation, Chris was offered a position at Baxter Healthcare in Round Lake, Illinois, where one of his accomplishments was helping to develop Adsol (increasing the life of blood in blood bags). Chris and Mary Jane put down roots and welcomed their three children, Steve, Kathy, and Scott. In 1987, they moved to Mountain View, California to be closer to family, and Chris started his 30 year career with Alza Pharmaceuticals doing engineering statistics and design of experiments. Chris developed lifelong friendships at Baxter, Alza, Danaher and eventually Cepheid.

Chris was a devoted father and husband. In his free time, Chris loved playing tennis and coached kids at Cuesta Park in Mountain View for 10 years. His passion for music was unmatched. He played in the worship band at Foothill Covenant Church for 25 years. He loved to be involved in his children’s activities on the sports field, at school, and at church. He devoted himself as a trustee at church. He loved working outside and was always happy to lend a helping hand to neighbors and friends to fix a sprinkler or two. Most of all, Chris loved talking to people. His warm and friendly demeanor earned him many dear friends.

Chris is preceded in death by his father, Don, and his mother, Bernice. He is survived by his wife Mary Jane, his three children Steve (Carly) and their sons Mason and Ryder, Kathy (Sal) and their sons Darren and Brayden Hernandez, Scott Lykke, his sister Carol (Dwight) Hudson, and several nephews and nieces.

Photo Gallery
0 photos Upload a photo
Remembrances
1 entry Submit a remembrance
From Steve Rabin
Aug. 31, 2022
I worked with Chris in his ALZA days. He was a very fine person, a real pleasure to work with and a highly knowledgeable and smart statistician. My deepest condolences to his family.
Memorial service
A memorial service will be held on Friday, September 16th at Community Bible Church, 601 Natoma Street, Folsom, CA 95630 at 10:30 am with a reception to follow at the Folsom Community Center on 50 Natoma St, Folsom.
Make a donation
In lieu of flowers, please consider a donation to the following charities in Chris’ name: Turning Point USA, Jesus Film Project, or Samaritan’s Purse.
About this site     Contact us