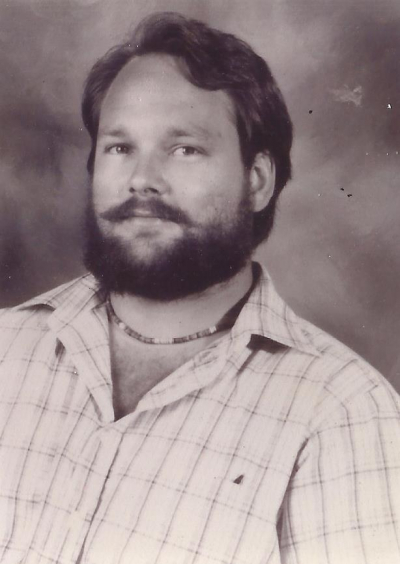 Brian D Bolitho of Palo Alto CA died on the evening of Sept 7th at the age of 67 years. Brian was born in Pullman, WA and in his own words he started off “as a juvenile delinquent”. He became a paraplegic at the young age of 16 after a tragic fall from a tree and spent the rest of his life in a chair. Brian experienced considerable obstacles in his lifetime and faced them all with optimism and good cheer. Few of us realized the complexity and commitment of staying healthy while living life in a chair.

As an adult he began a 27 year career in electronics as an assembler, technician, drafter and designer. He held jobs as an electromechanical designer, CAL designer and invented test and processing equipment. On the side he was a technical illustrator and created complex display units. After retirement he worked part time as a receptionist at the Pacific Art League and devoted himself to his artistic endeavors.

Brian found great comfort in his love of music, proclaimed himself a hippie and wore tie dye often as an expression of who he was. He was frequently recognized in his neighborhood of California Ave in Palo Alto. But all the things were secondary to Brian's pool game. He discovered pool in his teens. It was transformative in his life and was his main passion. After retirement he focused on his game and in league play he and his teams won 9 trophies, five of them first place. On the side as a solo player he won 21 tournaments. Brian earned a certain amount of fear and admiration and most noted were his one-handed shots. He often told people, "Pool is not a game, it is a sport. One shoots pool. Anyone who plays pool is doing it wrong." He was active and competitive till the end of his life.

In 1981 Brian met Margaret ``Gretchen” Hutz, the love of his life. He spent 40 years with her as a loyal companion. With Gretchen at his side, they lived a life filled with travel, family visits, and lots of BBQ. They loved road trips and often drove his van into the desert, listening to the Grateful Dead and traveling many miles together. He built a workshop at her home and created many astounding creations. Paper shapes, photo mosaics and imaginative & ambitious welded sculptures. Brian was unwaveringly devoted to Gretchen from the moment they met to the moment she passed away, holding his hand. We will forever be grateful to have witnessed their love. The death of Gretchen in 2021 was followed by losing his specially equipped handicapped accessible van. Being unable to travel freely was a huge setback to Brian who greatly valued his independence. Shortly after his return to CA, where he joined family for Gretchen's memorial in WA state, his health declined rapidly. The one place that rivaled his love of the desert was the family beach in WA where his ashes are now scattered with Gretchen’s.

We will remember him always for his booming laugh, endless ingenuity, master Scrabble skills, head-to-toe tie dye, love of sci-fi & football and his lifetime love of pool. Brian is preceded in death by his beloved, Margaret G Hutz, and his mother, Louise G Bolitho. He is survived by his niece Sarah Louise Bolitho, his sister, four step children & three grandchildren.