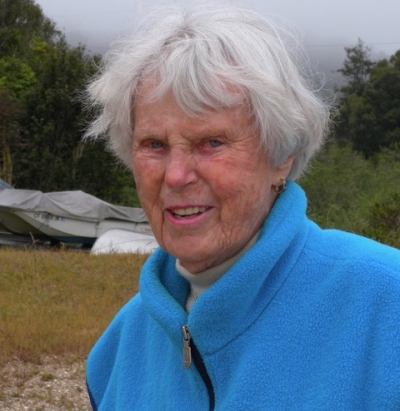 Barbara passed away peacefully aged 98 on the evening of August 5, 2020. She is survived by two daughters, Elizabeth of Mt Vernon, WA and Christine of Berkeley, along with one grandson, Nicholas of Sausalito. Barbara was born in Syracuse New York on January 29, 1922 to Genevieve and William Reck, the eldest of two daughters. In high school the family moved to Upper Montclair, New Jersey. She attended Mount Holyoke College, graduating in 1943 with a degree in economics. After graduation, she married Albert Hastorf on October 4, 1943. Once the war was over, they lived in Princeton, New Jersey while Al completed graduate school in psychology. Barbara gave birth to Elizabeth in Princeton, New Jersey in 1947. His first academic position was at Dartmouth College in Hanover, New Hampshire where he taught between 1948 and 1961. Christine was born there in 1950. When Al was hired at Stanford University, California in 1961, the family moved to the Bay Area, where Barbara resided until her death. She was a member of the Stanford Committee for Art, the Stanford String Quartet, and the Mount Holyoke Club on the Peninsula. Barbara and Al spent much time on Tomales Bay.

Photo Gallery
0 photos Upload a photo
Remembrances
0 entries Submit a remembrance
Memorial service
Given the current pandemic, her memorial will be delayed until we can safely be together. Her remains will be placed in Palo Alto’s Alta Mesa Memorial Park.
About this site     Contact us