From bagels to burgers, five local pop-ups worth seeking out

The Peninsula is full of pop-ups run by passionate cooks, bakers and restaurant owners 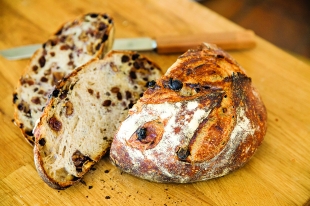 There's something alluring about pop-ups -- both their ephemerality and the sense of community you feel eating with like-minded people who are willing to seek out birria tacos made out of a home garage on a Tuesday afternoon or to support a software engineer pursuing his true passion for making Asian-inspired croissants.

Pop-ups often lay the foundation for permanent locations for food businesses, and it's exciting to follow up-and-comers as they transition to bigger things.

In no particular order, below are five pop-ups of note happening throughout the Midpeninsula.

Kayigire has been inviting chefs he meets while traveling or through connections he's made as a restaurant owner. (His business partner recently introduced him to Sawai on a trip to Japan, where Kayigire said he's opening a gin and vodka distillery.) The goal of the pop-ups, he said, is to bring more visibility to Los Altos.

"Our job is introducing as many people as possible to come enjoy Los Altos," he said. "I know a lot of chefs. For me, that's the best way I can give back to Los Altos."

Because Amandine doesn't have a kitchen, most of the dinners have been hosted at Bumble in Los Altos, but once the forthcoming State Street Market, a massive food hall, opens downtown, Kayigire hopes to move it there.

The next pop-up will be in April and feature a yet-to-be-named chef from Paris.

Tian Mayimin has drawn a local following for her naturally leavened breads, baked out of her Menlo Park home. A former criminal defense attorney and entrepreneur, she started experimenting with baking after moving to California, using a starter that has reportedly been nurtured by monks for more than a hundred years.

The Peninsula's only smashburger pop-up is run by Zack Fernandes, a communications manager at Apple by day and burger obsessive by night. He only serves smashburgers -- his latest iteration being two 2-ounce patties made from an 80-20 chuck blend, smashed to peak thinness and topped with gooey Kraft American cheese, caramelized onions and a mayo-based sauce that he "umamifies" with fish sauce and other ingredients on an unfussy potato bun.

"Burgers are such a quintessential immigrant food for me," said Fernandes, who was born in Singapore and moved to the United States as a teenager. "George Motz talks about this in his book ("Hamburger America") and some videos, but there would be no hamburger if the hamburg steak from Germany didn't end up at a world's fair in New York where some dude slapped it in between two slices of bread.

"I think it's funny that people view the hamburger as being so distinctly American," he said, "and forget about that very important factor."

Manresa Bread hosts two of its own pop-ups weekly: bagels on Tuesdays and pizza on Wednesdays, though the latter is only available at the Campbell location. All three locations of the bakery (Los Altos, Los Gatos and Campbell) serve naturally fermented sourdough bagels -- plain, sesame, everything and cinnamon raisin -- from 7 a.m. until the bakery sells out.

Manresa Bread, the bakery spinoff of the three-Michelin-star Manresa in Los Gatos, is the grain-forward brainchild of Avery Ruzicka, who was recently named a semifinalist for a James Beard award.

The Peninsula's sole Swedish sweets pop-up serves kardemummabullar (a cardamom bun), drömmar (Swedish dream cookies, akin to a Mexican wedding cookie), semlor (a yeasted bun sliced in half and filled with cream, traditionally served on Fat Tuesday) and other baked goods. Something Swede-ish owner Denise Touhey, who grew up in Belmont with her Swedish grandmother, draws inspiration from Swedish cookbooks and family recipes. She pops up on Thursdays at Woodside cafe The Village Hub, 3154 Woodside Road.

For a list of more pop-ups throughout the broader Peninsula and South Bay, go to thesixfifty.com.

These local restaurants are donating meals to Bay Area residents in need. Here's how to help.
By Elena Kadvany | 6 comments | 11,494 views