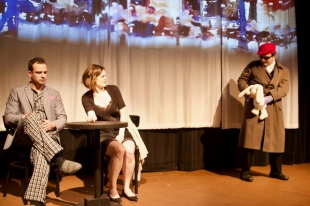 Dragon Productions Theatre Company is keeping busy, offering not one but two full productions currently in addition to its slate of classes and special events. Presented in rotating repertory, "The Baltimore Waltz," by Paula Vogel, and the world premiere of "Confession" by local playwright Barry Slater run through April 5 at the downtown Redwood City theater (2120 Broadway St.).

Both plays take place in the 1980s and are focused on relationships between siblings, as well as the AIDS crisis.

"Confession," directed by Robyn Ginsburg Braverman, is the story of estranged brothers with a traumatic childhood: a gangster and a priest who find themselves reunited after one becomes ill. "The Baltimore Waltz," directed by Troy Johnson, is a satirical fantasy about a woman who is diagnosed with a mysterious and deadly new virus and flees for Europe with her brother in search of a cure (written as a tribute to Vogel's brother, who died in the AIDS epidemic).

"It's an American classic paired with a play by a local playwright, with themes that resonate with each other and that also are a little too timely right now," Dragon Co-Artistic Director Max Koknar told the Weekly. "They look at the questions around family and loss and trauma from these two very different perspectives."

While the experience of producing two shows concurrently has been intense for the design teams in particular, "It's been really artistically satisfying to watch the two back to back," Koknar said. "It was challenging but, I think, worth it."

Tickets are $30-$39 and are available at Dragon Productions Theatre Company. Each show runs around 60 minutes with no intermission and on Saturdays, audiences can catch performances of both. Check online for specific showtimes (Thursdays through Sundays) and updated information.

Is this really still running given current events?

Due to ongoing public health concerns, events may be canceled with short notice. Check directly with the venue or event organizer to confirm. - Arts Editor Karla Kane

These local restaurants are donating meals to Bay Area residents in need. Here's how to help.
By Elena Kadvany | 6 comments | 11,471 views

Coronavirus: Plan ahead now for a big outbreak
By Diana Diamond | 20 comments | 4,364 views

The first few seconds after awakening; before I remember the virus
By Chandrama Anderson | 0 comments | 1,218 views