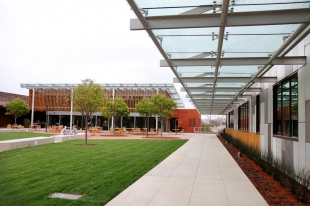 Just over 57% of voters — which surpasses the 55% threshold for passage — have supported the $898 million Measure G, the largest school bond in Santa Clara County's history. The bond will cover about 60% of the estimated $1.5 billion in infrastructure and capital needs at the community colleges in Los Altos Hills and Cupertino, from student and staff housing to technology and security upgrades.

About half of ballots have been counted so far, according to the Santa Clara County Registrar of Voters.

As of late Tuesday evening, over 60% had voted "yes" on Measure H, a $48 parcel tax that would provide the two community colleges with approximately $5.6 million annually over five years to help fund housing assistance for students and staff, mental health services, tutoring and services to address student food insecurity and homelessness. Support for Measure H has been inching up since early results were first released on Tuesday night but is still falling short of the two-thirds, or 66.6%, in support to pass.

About half of ballots have been counted so far, according to the Santa Clara County Registrar of Voters.

While Chancellor Judy Miner, reached Tuesday night at an election party for measures G and H at the campaign's headquarters in Cupertino, was "cautiously optimistic," about the early election results, by Wednesday morning she said it "doesn't appear likely" that the parcel tax will pass.

"On the other hand, having reached 57.18% for the bond makes us very happy that we will have some great resources to help not just our students but our larger region," she said.

Regardless of the election outcome, Miner said, the community college district's campaign had the result of prompting several housing initiatives, including a Joint Powers Authority agreement with the Fremont Union, Cupertino Union and Sunnyvale Union school districts (to be voted on by the board of trustees this Monday) and a potential opportunity to co-invest in a housing initiative with the city of Los Altos.

"The opportunity to help with housing production and many years down the road, even generating income for our district, is just a win-win in many ways," Miner said. "Since we are in this for the long game we are so interested in what can help our students and ultimately be an asset that the district has for many, many years to come."

As I read the SCC Registrar of Voters account so far, only 25% of registered voters have had their ballots counted. I don't see a total turnout figure. Maybe it is not reported except when all ballots have been counted. But can we figure over 50% voted? If so, counting is no more than HALF done. A 2% lead may not hold up.

6 people like this
Posted by Punxsutawney
a resident of another community
on Mar 4, 2020 at 5:00 pm

The same percentage of idiots voted for both. It's just that parcel taxes have a higher threshold to "pass".

The district cheated by putting a sales pitch on the ballot in violation of AB-195 (Elections Code 13119).

The registrar printed and circulated the ballots in violation of Elections Code 18401. That opens the door to an election contest (Elections Code 16101) to set the election aside, as a matter of law.

Housing is not a school facility permitted to be funded with Proposition 39 bond proceeds. How could voters know that they were voting for that?

Report Objectionable Content
Email Town Square Moderator
2 people like this
Posted by Gary
a resident of Sylvan Park
on Mar 6, 2020 at 12:12 am

Interesting points from Richard above. The deadline for filing a lawsuit to invalidate passage of bonds measures T and G (if it passes) could be 60 days from March 3. A threatened expenditure that is unlawful despite passage might be challenged later. Teacher or other employee housing may not qualify for the use of bond proceeds. If housing does qualify, such a use of bond money as a form of employee compensation would "free up" a lot of money otherwise spent on employee compensation for whatever the Superintendent and his school board fancy - such as more and higher paid administrators.

Richard I pinged you on your site. At this point, what can we do? I feel like the voters were misled here, and a 2% margin of passing (its looking like this is the number) is not particularly high. Not to mention the tacky use of "8", chinese lucky numbers.

As a recent home buyer in this district who will face a ~$20k bill over time for this tax, especially since its largely supporting students who enroll outside of my district, I'm frustrated. What's the next step?

Move to a low tax, low service state. I hear Kansas has decimated their school systems, as have a number of states.

These schools support the business community, we could raise business taxes, of course.

I am not against taxes, but I don't believe giving the district nearly $1 billion dollars after they already raised $700 million in the past 20 years that support 77% students outside of the college district with overall declining numbers in enrollment and no direct plan on how to use the funds is the right way to spend money.

Funds for schools have already increased ~60-80% since 2012 due to rising assessed values, yet we need more bonds?

Don't vote for funds if they send fancy mail. They obviously don't need it. (Don't send fancy-glossy mail asking for $$, duh.) And never vote Yes if you can't understand the thing.

These local restaurants are donating meals to Bay Area residents in need. Here's how to help.
By Elena Kadvany | 6 comments | 11,495 views