'The Assistant' dramatizes the issues underlying the Weinstein case and others 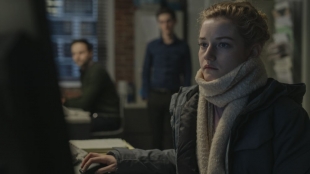 Kitty Green's drama "The Assistant" features a put-upon female protagonist working in the outer office of a movie mogul we never see or hear but whose out-sized presence overshadows everything. In the wake of real-life movie mogul Harvey Weinstein's recent guilty verdict for rape and sexual assault, "The Assistant" has the benefit of relevance in the current news cycle -- but it's about something much larger than even Weinstein, who threw his weight around Hollywood for years.

To craft her first fiction film as writer-director, Green applied her skills as a documentarian, interviewing women at the bottom of the corporate ladder in a variety of industries. And while film's plot ultimately takes shape around sexual misconduct and the sexual gratification of an alpha-male boss, Green examines the broader parameters of sexism in the workplace.

"The Assistant" provides an unsettling, and realistic, look at a young woman navigating a fraught American workplace still largely in the grip of the patriarchy. The film rests on the shoulders of talented up-and-comer Julia Garner (who blazes with a different flavor of intensity on Netflix's "Ozark"). As junior assistant Jane, Garner subtly embodies the inner war within so many in positions of powerlessness. How much is she willing to put up with? And can she afford not to?

Cleverly, Green fits these themes into one eventful and yet all-too-typical day at the office, from Jane's wee-hours commute into Midtown Manhattan to her quiet dark-of-night departure. Slowly, deliberately, Green depicts the accumulation of indignities for a woman in a boy's club environment. The two male assistants (Jon Orsini and Noah Robbins) who ostensibly share responsibility with Jane breezily banter with each other and take on the work that'll make them most likely to succeed, delegating the worst tasks overtly or by default to Jane. Although Jane has the least seniority -- until the arrival of a conspicuously unqualified young woman (Kristine Froseth) -- the office culture implies that men are unlikely to do the tasks expected of Jane: making coffee, cleaning up after the boss and her peers, ordering everyone's lunch and even handling the boss' used syringes (an allusion to Weinstein's use of erectile-dysfunction medication).

In this context, a paper cut is the least of the stings Jane feels. Although she does share some organizational duties ("manning" the phones and making travel arrangements), her nominally senior colleagues pawn off career-risky tasks to her in a manner that clearly makes them gendered: onboarding the new female hire and taking the call of her boss' wife with the understanding that Jane should lie about her bosses' whereabouts if she knows what's good for her. But it's that new hire that takes Jane beyond the pale and forces her into a moral dilemma. Faced with circumstantial evidence of, shall we say, human-resources violations, Jane takes a meeting with a corporate stooge (Matthew Macfadyen). It's a climax that avoids sky-high fireworks in favor of ground-shifting aftershocks.

"The Assistant" functions as a thoughtful post-mortem on the institutional enabling of a monster like Weinstein, but also an encapsulation of decades of once-countenanced belittling of women in male-dominated business environments (and political ones). As the #MeToo movement gains ground in the workplace, a film like Green's plays its part not by preaching, but by gathering intel, speaking truth to power and winning hearts and minds.

These local restaurants are donating meals to Bay Area residents in need. Here's how to help.
By Elena Kadvany | 6 comments | 11,480 views

Coronavirus: Plan ahead now for a big outbreak
By Diana Diamond | 20 comments | 4,368 views

The first few seconds after awakening; before I remember the virus
By Chandrama Anderson | 0 comments | 1,219 views