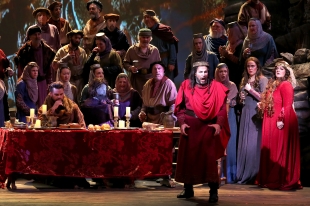 At a banquet, Krassen Karagiozov as Macbeth rails on as if he's seen a ghost. Which he has. Seated at the table is the ghost of Banquo, whom Macbeth had ordered to be murdered. Photo by Otak Jump.

Are you familiar with Shakespeare's "Macbeth" and planning to see a performance of West Bay Opera's production of Giuseppe Verdi's opera of the same name? An excellent decision — and knowing the Shakespearean plot you won't be surprised by the dominant color presiding on the well-ordered stage: Red. Raging red. Blood red.

The story of the Thane of Cawdor and his wife, Lady Macbeth, is a bloody tale indeed, a petri dish in which Shakespeare unleashes naked ambition and power lust to mingle with human hearts unguided by a moral compass. The results are not pretty.

But even the ugliest aspects of human nature can be transformed into great art, a feat accomplished on a historical scale by Shakespeare and Verdi, and on a more transitory but nevertheless grand scale by our local opera company, which is staging its gripping production at the Lucie Stern Theatre through Sunday.

While the tale of the Macbeths and their evil deeds is anything but uplifting, the telling of it soars in this production, thanks to a stellar lead cast and the skilled stage and music direction that local opera goers have come to expect.

Verdi's "Macbeth," which premiered in 1847 in Florence, Italy, was the first of three operas the composer wrote based on Shakespeare's plays. Like the original play, it contains riches of witches, the unwelcome ghost of the murdered Banquo at a banquet, and, of course, that damned spot.

Major made her debut with West Bay as Donna Anna in Mozart's "Don Giovanni" and went on to perform the challenging role of Norma in Bellini's opera of the same name. Earlier this season, she performed the role of Lucrezia Contarini in Verdi's "I due Foscari." With each performance, her star quality shone, and her portrayal of Lady Macbeth is no exception.

Verdi was said to dismiss the notion of beautiful vocalization in the character of Lady Macbeth. He was after a voice that signaled a brutality, a window into the heart of evil.

It's hard to imagine that any great singer of Major's caliber would intentionally sing in a "hoarse, stifled, hollow voice," as Verdi desired. But his call for a voice capable of expressing even the ugliest aspects of human nature is answered magnificently in her performance.

And it is fitting that the loveliest expression of her great vocal gift floats ethereally from the stage in her aria, Una macchia e' qui tuttora ("The spot is still here"). Lady Macbeth is guilty of hideous acts, but it is only toward the end of this story that she feels piercing guilt; it is remorse, conveyed in wrenching but exquisite music and singing, that reveals Lady Macbeth as human, flawed though she is.

Karagiozov's tremendous vocal gifts are on full display in his portrayal of Macbeth. Near the conclusion of the opera, his deeply moving lamentations Pieta', rispetto, amore and La vita! ... che importa? showcase aspects of his skills — a range of expression — that earlier scenes of arrogance and belligerence kept hidden.

This production is but the latest feather in Karagiozov's West Bay cap: Other roles he has memorably performed are Enrico in "Lucia di Lammermoor," the title role in "Rigoletto," and Escamillo in "Carmen."

The only problem with baritone Benjamin Brady's portrayal of Banquo is that it is too brief. Banquo, alas, is murdered early on. Brady's stage presence is commanding — even as a ghost — but his is a sonorous and expressive voice we want to hear more of.

Tenor Dane Suarez as Macduff also turns in an impressive performance, both in his singing and commanding presence on the stage.

This production also features dancers, in scenes choreographed by Kara Davis, who enhance the menacing tone of the story. They are witches and spirits, a trio of which slither their way into the banquet in which the ghost of Banquo appears to Macbeth, giving it an added dimension of foulness and creepiness.

Also worthy of applause are a robust performance by an orchestra powerfully conducted by Jose Luis Moscovich, West Bay's general director; the stage direction of Ragnar Conde; set and projection design by Peter Crompton; costumes by Callie Floor; and lighting by Steve Mannshardt.

Performances are at the Lucie Stern Theatre, 1305 Middlefield Road in Palo Alto.

Tickets are $35 to $85, with group, senior and student discounts available, and can be purchased online at wbopera.org.

The first few seconds after awakening; before I remember the virus
By Chandrama Anderson | 0 comments | 3,345 views

Can you stay healthy without making more trash?
By Sherry Listgarten | 6 comments | 2,758 views

Think about helping others in our coronavirus-affected area
By Diana Diamond | 7 comments | 2,554 views