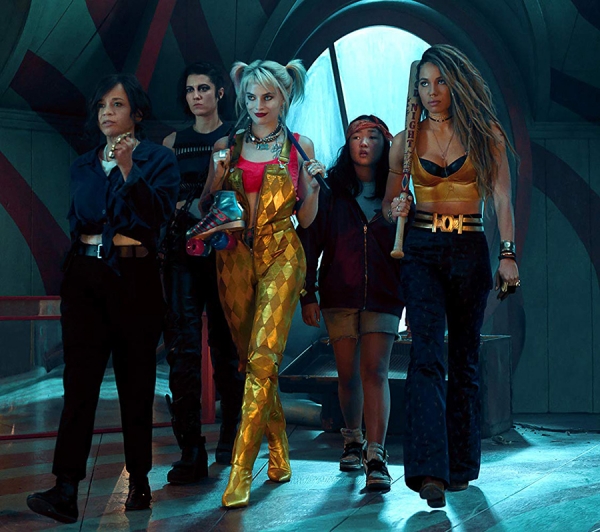 After splitting with the Joker, Margot Robbie's Harley Quinn (center) joins superheroes Black Canary, Huntress and Renee Montoya to save a young girl from an evil crime lord in "Birds of Prey." Photo by Claudette Barius, courtesy of Warner Bros. Entertainment Inc.

"Birds of Prey and the Fantabulous Emancipation of One Harley Quinn" may be about as shallow as a puddle, but that's still enough to make a splash.

Based on a DC Comics team-up property that dates back almost a quarter-century (and characters that have existed even longer), "Birds of Prey" spins off from the 2016 film "Suicide Squad."

In this story, it turns out that blondes do have more fun, especially when they sport pastel highlights and carry a big mallet -- I refer, of course, to Harley Quinn, a.k.a. Dr. Harleen Quinzel.

"Suicide Squad" introduced Margot Robbie in the role of the Joker's girlfriend, a psychologist gone head over heels. Robbie easily stole "Suicide Squad," and the timing couldn't be better for her character to step out as the lead in this spinoff directed by Hollywood first-timer Cathy Yan.

"Birds of Prey" tells a liberation narrative of the deeply co-dependent Quinn stepping out of the long shadow cast by Batman's nemesis the Joker. "Mr. J and I were dunzo," Quinn narrates before decimating the "romantic" spot marking their origin as a couple -- fittingly, the toxic Ace Chemicals factory -- and announcing her "fresh start, the chance to be my own woman."

The film's R-rated gusto strongly suggests a grrrl-power spin on "Deadpool," but Yan puts her own stamp on the material, giving it a momentum that feels more like a cross between "Fight Club" and Tim Burton's "Batman."

Where "Deadpool" heaped snark on top of its dark emotional undercurrents, "Birds of Prey" heaps insanity, with Quinn holding the batty, psychoanalytic center of what's typically been a superheroic team. "A lot of people in this city want me dead," Quinn confesses, and with the protection of Joker removed from the equation, Quinn discovers she could use the help of a few other rule breakers. Ewan McGregor makes a meal of the scenery as smarmy psychopath Roman Sionis, a.k.a. Black Mask. The club-owning mob boss and his killer henchman Victor Zsasz (Chris Messina) set their sights on the Bertinelli diamond, a gem that's also the code-breaking key to a fortune that will enable Sionis to rule Gotham City. The diamond makes its way into the hands of child pickpocket Cassandra Cain (13-year-old Ella Jay Basco), who quickly wins the misfit protection of an unlikely de facto team: Quinn, estranged GCPD cop Renee Montoya (the always terrific Rosie Perez), and vigilantes Black Canary (Jurnee Smollett-Bell) and Huntress (a comically uptight Mary Elizabeth Winstead).

Yan and screenwriter Christina Hodson ("Bumblebee") throw everything at the screen to see what'll stick (including a concussive musical reverie paying Gaga-esque tribute to Marilyn Monroe), but the film's secret weapon is its unpretentious pace. At one point, an aluminum-bat wielding Quinn inhales a wayward cloud of cocaine, fueling the film's latest beatdown. That's a good metaphor for the whole picture, which for better and worse, refuses to get bogged down with details but rather proceeds to let its characters collide like bumper cars in the service of hyperactive plotting, audacious action, sight gags, saturated colors and appealing nutty production design.

"Birds of Prey" practically dares its audience to make the mistake of taking it seriously, and yet it's a bizarrely uplifting story of credibly tough women, Gotham City survivors all vanquishing a sneering, preening abuser whose time's up.

Posted by Name hidden
a resident of Another Mountain View Neighborhood


Due to repeated violations of our Terms of Use, comments from this poster are automatically removed. Why?

9 people like this
Posted by Sigh
a resident of Another Mountain View Neighborhood
on Feb 7, 2020 at 10:29 am

One day they'll make movies again, instead of comics

"One day they'll make movies again, instead of comics"

These local restaurants are donating meals to Bay Area residents in need. Here's how to help.
By Elena Kadvany | 6 comments | 11,489 views

Coronavirus: Plan ahead now for a big outbreak
By Diana Diamond | 20 comments | 4,369 views

The first few seconds after awakening; before I remember the virus
By Chandrama Anderson | 0 comments | 1,221 views