It's winter, and that means the birds are in town | News | Mountain View Online |

It's winter, and that means the birds are in town 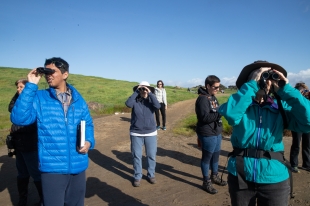 Ashwin Singh, left, Trina Warren, center, and tour guide Chris MacIntosh watch a group of dowitchers on the bank of a little island in the waters at Bedwell Bayfront Park on Jan. 11. Photo by Magali Gauthier/The Almanac

Local Journalism.
What is it worth to you?
Join