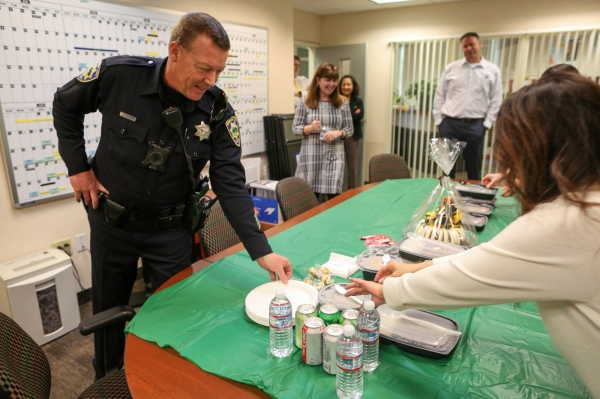 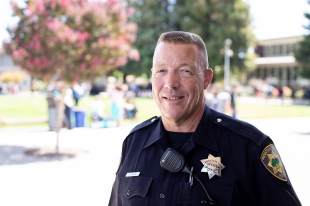 Bobby Taylor spent the last eight years as a critical connection between law enforcement and local high schools in Mountain View, guiding students and staff alike through the proliferation of social media and fast-changing drug trends.

But after stretching what is ostensibly a two-year assignment, Taylor is finally calling it quits. He served his last day as school resource officer for Mountain View High School last week, and is officially back to being a Mountain View patrol officer.

Taylor, whose tenure at Mountain View high started in 2011, strove over the years to foster personal relationships with students and was widely credited for being a mentor. He won accolades from Challenge Team of Mountain View, Los Altos and Los Altos Hills for his work in 2017 as a "champion" for youth, creating a climate for students to talk openly about tough issues like gang activity, drugs and mental health.

Police officers in the department typically serve specialized assignments, like school resource officer, for only two years with the option for a two-year extension.Due to an influx of new officers in the unit who weren't yet ready to step in, Taylor ended up doing an extra four years.

It was hardly a burden, Taylor told the Voice. He said the department was "generous" giving him the extra time, and that he plans to stay involved with teens when he reverts back to patrol starting this week.

"The entire time, I always wanted to be there," Taylor said. "It was my passion, I enjoy working for youth, and even from patrol I'll still be able to participate in youth-related activities."

With the extended time at Mountain View High, Taylor said he got the benefit of building strong ties with the school staff, which he said started to feel like family. His farewell party at the school on Jan. 23 wasn't among students but with school staff, who gathered in the front office for a low-key celebration.

"He's just been awesome to work with," said Principal David Grissom. "I've had the opportunity to work at multiple schools including Mountain View, with a lot of different school resource officers. While each of them brings their own style, there is something special about Bobby."

On paper, the on-campus police officer is there to provide security and handle student law enforcement incidents and, in rare cases, cite and arrest students. They also provide information to students and parents about current drug trends and periodically handle mental health issues particularly if it means an officer has to involuntarily detain students in crisis who poses a danger to themselves or others.

In practice, it meant Taylor checking in with students and asking how they're doing, exchanging fist bumps in the hallways, Grissom said, and volunteering to do talks with student clubs and parent groups. He was still an authority figure on campus, but it was one of respect rather than distrust or fear.

Grissom said he was surprised to see Taylor stick around for eight years, and said the department probably kept him as a school resource officer because he had a knack for working with youth and knew everyone so well. He wasn't officially part of Mountain View High's staff, but he may as well have been.

Taylor said the bonus time as a school resource officer gave him a front-row seat to so many changes, watching social media go from nonexistent to enveloping all social interaction among students. It meant a fresh wave of new types of online crime and forced police departments to adjust to the digital age.

E-cigarettes and vaping are now huge problems in high schools across the country, but it wasn't a thing when Taylor first started. He said he saw his first vape pen on campus about six years ago and didn't even know what it was.

Though vaping is perceived to be a big public health hazard due to severe and sometimes fatal lung injuries, Taylor said he worries that the ultra-high concentration of THC in marijuana products also pose a risk to teens with developing brains. It's getting more powerful and easily accessible under changes in state laws, including the legalization of recreational use of marijuana in 2016.

During his term as school resource officer, Taylor took a yearlong hiatus after he was diagnosed with stage 3 colon cancer in 2017. He underwent a six-month of aggressive cancer treatment and spent five months recovering before returning to the job last August. Shortly after returning, Taylor told the Voice that returning to the police department and continuing his job was his priority.

Thank you, Officer Taylor, for a job well done!

I have always enjoyed our brief interactions as I worked on mentoring kids at AVHS, volunteering at MVHS and at the ChallengeTeam meetings at MVPD, etc. I have heard from students that you have quite a few fans at school and they will miss you.

I have met your replacement and it seems like we are in good hands going forward.

Thank you for doing such a great job as SRO and good luck back on patrol.

The first few seconds after awakening; before I remember the virus
By Chandrama Anderson | 0 comments | 3,333 views

Can you stay healthy without making more trash?
By Sherry Listgarten | 6 comments | 2,745 views