Bonds on the ballot: Will billions of dollars help California cope with climate change? 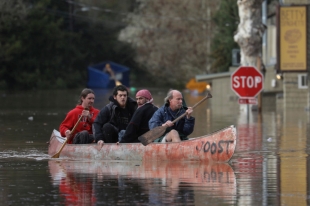 Guerneville residents paddle through the flooded streets of their Russian River town last year. Flooding is one of the problems worsened by climate change. Photo by Karl Mondon/Bay Area News Group.

Local Journalism.
What is it worth to you?
Join

How about that bond measure on the March 3 state ballot? Forget the bond measures on the local ballot for the moment. The state proposes another $15 billion to be borrowed (double to re-pay with interest) for what? The state voter guide just arrived. There is only one proposition on the state ballot. The number 13 has come around again: Proposition 13. And check out the part that bans school districts from collecting fees from developers for adding residents including school children.

Flying: How to lower your impact
By Sherry Listgarten | 19 comments | 3,254 views

My angst about the disaster of these two debates
By Diana Diamond | 28 comments | 1,624 views