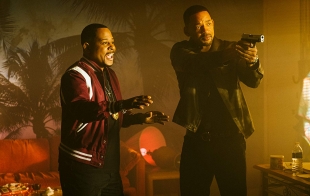 Martin Lawrence and Will Smith return to the screen together in "Bad Boys for Life." Photo courtesy of Columbia Pictures.

There's a lot of talk about fan service these days in an entertainment landscape where sequels, revivals and reboots rule. But "Bad Boys for Life" includes a scene of literal fan service when Martin Lawrence's retired Miami P.D. detective disastrously attempts to repair his ceiling fan. Of course, it's not that passing sight gag that fans will come for: it's the re-teaming of Lawrence and Will Smith in a 17-years-later sequel to "Bad Boys II."

"Bad Boys for Life," like so many years-later sequels, plays a little differently to its primary target audience of old-school fans and to the young first-timers it also hopes to draw. The third entry goes at nostalgia hard in its opening sequence, with its swooping Miami views, blocky credits font announcing "A Don Simpson and Jerry Bruckheimer Production" (Simpson died 24 years ago, a year after the release of "Bad Boys"), and hot-rod racing with Smith at the wheel and Lawrence riding shotgun. For the younger viewers, everything old is new again (the buddy action-comedy formula, with well-cast buddies, rarely fails), but it's been reworked to resemble the modern standard: the "Fast and Furious" franchise with an ensemble of young cops and a police task force named AMMO.

Despite all that, the focus remains squarely on the dynamic between lovingly bickering bros Mike Lowrey (Smith) and Marcus Burnett (Lawrence), the former a confirmed bachelor and the latter a family man newly anointed as "Pop Pop" to a grandchild named after him. Adding immeasurably to the film's enjoyment: returning player Joey Pantoliano as the bad boys' Pepto-Bismol-swigging police captain.

The script by Chris Bremmer, Peter Craig and Joe Carnahan predictably makes hay from the leads' midlife crises: Lowrey's ride-or-die loner shtick isn't aging well, and Burnett's insistence on retirement creates extreme tension that only escalates when criminals from Lowrey's past (Kate Del Castillo and Jacob Scipio as mother-son killers) begin a revenge campaign of gunning down the law-enforcement folks they hold responsible for their downfall. This time, it's personal, and then more personal, and then more personal, as the plot twists pile up. Although erstwhile "Bad Boys" director Michael Bay shows up to bless the project in a cameo role, it's Belgian duo Adil and Bilall who get their Hollywood break here orchestrating the chaotic action mayhem (from a motorcycle/sidecar chase to a fiery shoot-em-up climax).

These films strike a strange tone. There's the bombastic action that must be accepted on fantasy terms lest we recognize what terrible people the heroes would be in real life (Lowrey alone performs life-endangering reckless driving while not even on the job, practices police brutality and generally violates procedure and civil rights with impunity). And then there's the melodrama that gives the plot emotional weight (Lawrence gets in a crack comparing it to the telenovelas he watches with his family). Contemplating any of this action-comedy camp in real-world terms would be a maddening mistake. Accept Lowrey's assessment that "Violence is what we do," or pick another movie.

The first few seconds after awakening; before I remember the virus
By Chandrama Anderson | 0 comments | 3,331 views

Can you stay healthy without making more trash?
By Sherry Listgarten | 6 comments | 2,738 views