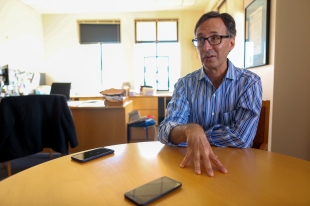 Dan Waylonis is a registered user.

He help create the RV problem in MV. We are stuck with massive developments and the character of the city with its views of the mountains has been destroyed. Good riddance while you take the money and run.

Rich’s PERS income will likely be closer to 75% of his salary plus health care benefits.

I really screwed up. I have a CS masters degree and still work in tech at 60. Any pension is only what I can save over the years. Rich never created anything or got a patent in anything. Yet his pension is secure and he is worth millions for being a public administrator. Had I a crystal ball knowing that being a fireman or a city manager was so lucrative I would have done it differently. I just finished working 80 hours this week. Good for Rich and may he have a retirement like his name - Rich.

Report Objectionable Content
Email Town Square Moderator
8 people like this
Posted by Corrections
a resident of Willowgate
on Dec 19, 2019 at 10:24 pm

Being City Manager for Mountain View is equivalent to being CEO of a company with more than $300 million in annual revenue and stricter reporting requirements than a publicly traded company. This is not an IC or middle manager role. Despite that, an IC or middle manager working at the big tech companies gets paid enough more than the city manager to cover his salary plus enough savings to fund an equivalent retirement.

Report Objectionable Content
Email Town Square Moderator
1 person likes this
Posted by Failing Up
a resident of Shoreline West
on Dec 20, 2019 at 7:06 am

Report Objectionable Content
Email Town Square Moderator
5 people like this
Posted by Bruce
a resident of another community
on Dec 20, 2019 at 12:03 pm

Those who criticize simply do so out of ignorance. They don't know or appreciate the amount of work or intellectual challenge the job presents. So easy for us to assume somebody's else's job is so easy and they have it made. Yes, the financial perks are great -- so perhaps some of you should consider a job in public service as well!
As for the story -- writer missed out on one major aspect of Dan's personality -- his understated sense of humor. Those who actually know him will miss him. I wish him the best.

MV_Voter is a registered user.

Flying: How to lower your impact
By Sherry Listgarten | 19 comments | 3,232 views

My angst about the disaster of these two debates
By Diana Diamond | 28 comments | 1,591 views