It's all in the game | News | Mountain View Online |

It's all in the game

'Next Level' keeps Jumanji franchise on the move 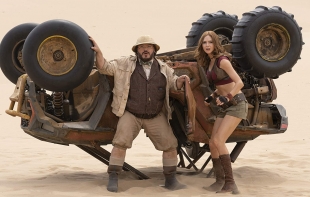 Action cinema in the age of computer-generated imagery has trended toward increasingly improbable, if not downright impossible, stunt sequences -- but one franchise gets away with them guilt-free. After being launched by director Joe Johnston and star Robin Williams in 1995, the resuscitated Jumanji franchise took the premise of a magical board game and updated it to a magical video game. When the characters of "Jumanji: Welcome to the Jungle" and now "Jumanji: The Next Level" enter that video game, anything -- including wildly unrealistic action -- can happen.

In the newly released "Jumanji: The Next Level," Spencer returns from his first year of college in a deep funk. Associating his depression with withdrawal from the game, where he found the romance with Martha that's since fizzled, he literally picks up the broken pieces of the Jumanji game and gets pulled back into its world. Reasoning that he's likely to die on his own, his three friends decide to follow him back into the game, but the glitchy game leaves Bethany behind, instead taking Martha, Fridge and two newcomers: Spencer's granddad Eddie (Danny DeVito) and his frenemy Otis (Danny Glover), erstwhile buddies estranged after the sale of their joint restaurant venture.

The conceit allows Johnson to goof it up with a halfway decent DeVito impression and usefully tamps down Hart's overacting instincts by having him imitate the breathy, slow-talking, understated pedantry of Glover. Black now plays Blain's character, again unhappy in a body that lacks endurance, while Gillan's "killer of men" reunites with Turner's Martha. The sequel holds some mix-and-match surprises in store as we run into new (Awkwafina) and returning (Nick Jonas) guest stars. Sure, there's an in-game objective (reclaiming "the fertility jewel of Jumanji"), but what we're really here for is the action: a desert stampede, a vertiginous rope-bridge challenge and a mountaineering adventure that leads to a climactic showdown involving a remote stronghold, lots of hand-to-hand combat and flying the not-so-friendly skies with the bad guy's zeppelin (Rory McCann of "Game of Thrones" gamely plays stock-villain Jurgen the Brutal).

Although one svelte human stuck in a portly avatar comments, "All bodies are beautiful," the film levels up the body-dysmorphia theme in "Welcome to the Jungle" by introducing characters in their 70s and comparing and contrasting them to the teen characters. Like grandson, like grandfather: Both miss the physical formidability and attendant self-confidence they once had -- Spencer in the game and Eddie in his youth. In setting up the premise, DeVito busts out some prime physical comedy, milking every laugh like the pro he is while repeating his mantra "Getting old sucks. Don't let anybody tell you any different." Even that attitude gets tested and upended, so if "The Next Level" plays fast and loose, it also makes an effort to prompt viewers to reflect not only on the freedom of fantasy, but on the essential relationship of mind and body.

These local restaurants are donating meals to Bay Area residents in need. Here's how to help.
By Elena Kadvany | 6 comments | 11,477 views

Coronavirus: Plan ahead now for a big outbreak
By Diana Diamond | 20 comments | 4,367 views

The first few seconds after awakening; before I remember the virus
By Chandrama Anderson | 0 comments | 1,219 views