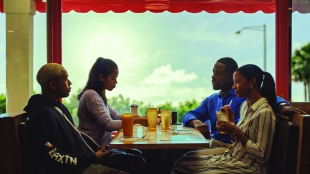 "Waves" looks at the internal struggles of an upper-middle-class family from Florida. Photo courtesy of A24.

The new drama "Waves" goes out on Alabama Shakes' "Sound and Color," giving summative voice to writer-director Trey Edward Shults' dramatic and stylistic intentions: "This life ain't like it was/Sound and color/I wanna touch a human being/Sound and color/I want to go back to sleep/Sound and color/Ain't life just awfully strange?/I wish I never gave it all away..."

"Waves" is so reliant on music that it almost plays as a stealth jukebox musical: Its needle-drops of Frank Ocean, Animal Collective, Chance the Rapper, Kanye West and Radiohead playing Greek chorus to the tragic struggles of an upper-middle-class family from south Florida. Shults also has Trent Reznor and Atticus Ross in his corner, providing a pulsing undercurrent of score.

Shults first made a splash with his partly autobiographical indie "Krisha," a likewise intense family drama. Not without controversy, Shults explores similar territory with an African American family. On the surface, 18-year-old Tyler (Kelvin Harrison, Jr. of "Luce") has it all: high-school wrestling stardom, a beautiful girlfriend (Alexa Demie), a steady senior-year party scene and, at his luxurious, well-insulated home, a father (Sterling K. Brown), stepmother (Renee Elise Goldsberry) and sister (Taylor Russell).

But from the opening montage, we're exposed to the daily pressures that weigh on Tyler: a wrestling coach pushing him over and over to"have a plan;" a teacher pushing students to "seize the day;" and his father lecturing him that he's "Gotta work 10 times as hard to get anywhere. Ty, I don't push you because I want to, I push you because I have to."

Of course, something's gotta give, an implicit promise telegraphed in every way by Shults (including Dinah Washington's iconic recording of "What a Diff'rence a Day Makes," heard twice in the film). Promise fulfilled, "Waves" reveals its bifurcated structure by handing the protagonist baton to Tyler's younger sister Emily. The intense pressure, loud sound waves and baths of color that shape the film's first act yield to Emily's quiet mien of internalized despair and shame at life's unintended consequences and a family divided by circumstance and grief. Help arrives in the form of classmate Luke (Lucas Hedges), who, it turns out, could use a little emotional support of his own.

The searching camera of Tyler's half of the film -- with its plunging depth and 360-degree pans -- gives way to a slower, simpler visual scheme that nevertheless compares Emily's experiences to Tyler's with an occasional visual rhyme.

"Waves" pushes simplistic drama and sophisticated style, churning tides of love and hate, despair and hope, familial disconnection and aspirational reconnection. Women pushed into men's shadows persist to step out of them, and hurt people help each other to reach out to the intimates who are hardest to love dramatizing the grace embodied by the tender performances of Hedges and especially Russell. Ambitious but messy, "Waves" settles for grabbing us by the shoulders, staring us down and making us hear the scriptural message delivered by Brown's redemption-seeking father: "Hatred stirs up strife but love, love covers all offenses."

These local restaurants are donating meals to Bay Area residents in need. Here's how to help.
By Elena Kadvany | 6 comments | 11,494 views

Coronavirus: Plan ahead now for a big outbreak
By Diana Diamond | 20 comments | 4,377 views

The first few seconds after awakening; before I remember the virus
By Chandrama Anderson | 0 comments | 1,227 views