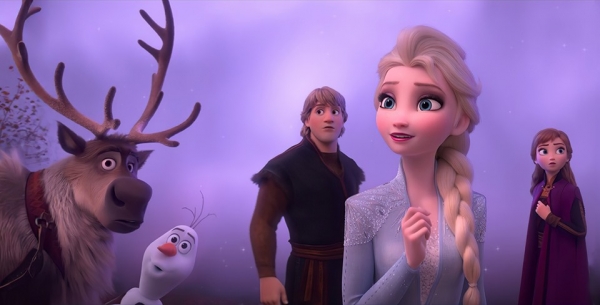 Elsa and the rest of the "Frozen" characters set out to find the origin of her powers in "Frozen II." Photo courtesy of Walt Disney Studios Motion Pictures.

Disney's princess culture took a palpable hit from 2013's "Frozen," Disney's 53rd animated feature. Speaking of hits, "Frozen" was a certified one at the box office, bringing in over $1.2 billion worldwide for its revisionist take on Hans Christian Andersen's "The Snow Queen." As sure as there are shareholders, then, "Frozen II" was inevitable, and its day has come.

"Come, my darling, homeward bound. When all is lost, then all is found," sings Queen Aduna (Evan Rachel Wood) in the film's seven new songs (again by the two-time Oscar-winning team of Kristen Anderson-Lopez and Robert Lopez). While nodding at a return to the world of "Frozen" six years later, "All is Lost" sets up the mysterious history behind this sequel's plot: "A very old and enchanted forest" lies somewhere out there, "a place of transformation." From this hidden world, a voice that only Elsa (Idina Menzel) can hear wafts into Arendelle, eventually prompting Elsa, her sister, Anna (Kristen Bell), Anna's boyfriend, Kristoff (Jonathan Groff), Kristoff's reindeer, Sven, and sentient snowman Olaf (Josh Gad) on a risky mission to find answers and, hopefully protect Arendelle. In the process, they stumble upon the origin of Elsa's wintry superpowers.

"Frozen II" touches on environmental themes and, even more so, indigenous rights as our heroes turn up the past of a hidden culture and Arendelle's own colonialist past. In most respects, "Frozen II" has a more considered and less piecemeal plot than its predecessor. But if "Frozen" didn't always make story sense or character sense, it felt right to audiences, and the makers of "Frozen II" chase that feeling by putting an emphasis on broadly drawn characters and animated dazzle. These come together most prominently for the number "Into the Unknown," sung by Menzel and the clear power-ballad inheritor of Oscar-winning Best Song "Let it Go." Add plenty of goofy gag comedy that goes into overdrive whenever Olaf is around, and "Frozen II" amounts to a crowd-pleasing sequel that knows not to mess with a winning formula.

Bell gets a weepy musical soliloquy in "The Next Best Thing," while Groff this time gets to better demonstrate his musical-theater chops with, of all things, an '80s-style rock ballad, "Lost in the Woods." The way the characters talk out their thoughts in song remains pretty clunky (albeit with kid-friendly lyrical simplicity), but this cast can sing, and the orchestra swells accommodatingly. By embracing the environmental harmony of air, water, fire, earth and a fifth spirit to be named later -- as well as pointedly setting up its own Turkey Day-teasing Truth & Reconciliation Commission about a proud nation's not-so-proud past -- "Frozen II" arrives just in time for Thanksgiving as an entertainment parents and kids can be thankful for.

These local restaurants are donating meals to Bay Area residents in need. Here's how to help.
By Elena Kadvany | 6 comments | 11,503 views

Coronavirus: Plan ahead now for a big outbreak
By Diana Diamond | 20 comments | 4,391 views

Will the Coronavirus Save Lives?
By Sherry Listgarten | 29 comments | 4,055 views

The first few seconds after awakening; before I remember the virus
By Chandrama Anderson | 0 comments | 1,241 views