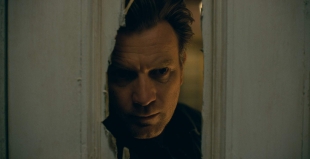 Ewan McGregor plays a grown up Danny Torrance, who returns to the Overlook Hotel, in "Doctor Sleep." Courtesy of Warner Bros.

Memories, like ghosts, have a way of haunting people with their psychic energy. It's a notion that powers Stephen King's 2013 novel "Doctor Sleep," a story of reckoning with the long-ago trauma depicted in his 1977 novel "The Shining." Cinematic memories can be almost as indelible as real experiences, which brings us to the film "Doctor Sleep," adapted, directed and edited by Mike Flanagan as not only a film of the sequel novel but a sequel to Stanley Kubrick's 1980 film of "The Shining."

"Doctor Sleep" couldn't avoid being a heady brew of memory, horror, novelistic storytelling and cinema if it tried. Rather, Flanagan tries and largely succeeds at reconciling the work of King and Kubrick for a continuation that -- while doomed to a diminished return from a cinematic classic -- makes for a moody and unsettling horror fantasy. King famously hates Kubrick's "The Shining," so he's bound to be triggered by Flanagan's "Doctor Sleep." Flanagan fully embraces the visual and aural imagery of his forebear's horror masterpiece, at times recreating moments from that film.

The early passages of "Doctor Sleep" focus on the aftermath of "The Shining," with Wendy Torrance (Alex Essoe, styled like Shelley Duvall) attempting to start a new life as the single mother of Danny Torrance (Roger Dale Floyd). Complicating their fresh start are ghosts that continue to have designs on Danny, although one has his best interests at heart (Carl Lumbly's Dick Hallorann). The past is prologue, but soon these flashbacks give way to the story of adult Dan Torrance (Ewan McGregor). The cycle of alcoholism and violence has claimed Dan, a drunken mess attempting to lay low in New Jersey.

As "Doctor Sleep" spins its novelistic web of characters, new threats emerge. The True Knot, a band of soul-huffing semi-immortals (yeah, they're pretty much psychic vampires), prey on those with the psychic ability that Dan and Dick call "the shining." Led by the charismatic but deadly Rose the Hat (a mesmerizing Rebecca Ferguson), the True Knot travels in a caravan, tracking down the young and powerful and painfully killing them to extract their last gasps, a life-extending "steam." As Dick puts it, "They eat screams and drink pain." In a curiously resonant line, True Knot member Crow Daddy (Zahn McClarnon) laments to Rose that "The world's not as steamy" as it used to be. There's probably a whole other movie in that line, but this one has a lot more fish to fry.

An 8-year time jump finds recovering alcoholic Dan relocating to Frazier, New Hampshire, where he takes work first at a town square attraction called Teenytown (a rhyme with the miniature maze model from "The Shining") and then as an orderly at a hospice, where a death-sniffing cat helps him to ease dying patients into their afterlives. As such, he acquires a reputation as "Doctor Sleep," recalling Dick's nickname for young Danny: "Doc." Meanwhile, powerful teen shiner Abra (a simply terrific Kyliegh Curran) becomes psychic witness to one of the True Knot's murders. From that traumatic moment on, Abra targets the True Knot, and the True Knot targets her, even as Abra's psychic pen pal Dan advises her to hide.

Reluctantly, Dan follows his conscience and teams up with Abra to face the evil of the True Knot, and of course, all roads lead back to the site of Jack Torrance's original sin against his wife and five-year-old son: the Overlook Hotel.

"Doctor Sleep" has no chance of packing the same punch as "The Shining," but it benefits from its literary and cinematic history, giving it a significant head start in chasing our investment. McGregor contributes an effectively understated leading performance.

While dialoguing with two masters, Flanagan makes his own mark with his combination of tasteful restraint, a focus on story and judiciously applied style. In some ways, "Doctor Sleep" has to feel like a pop-cultural footnote, but that's not fair to what's a ripping yarn in its own right. Dan Torrance's struggles with trauma, abuse, and addiction make for a story worth telling, a question worth answering come the end of "The Shining": what happened to that poor boy?

These local restaurants are donating meals to Bay Area residents in need. Here's how to help.
By Elena Kadvany | 6 comments | 11,496 views

Coronavirus: Plan ahead now for a big outbreak
By Diana Diamond | 20 comments | 4,382 views

Will the Coronavirus Save Lives?
By Sherry Listgarten | 29 comments | 4,051 views

The first few seconds after awakening; before I remember the virus
By Chandrama Anderson | 0 comments | 1,231 views