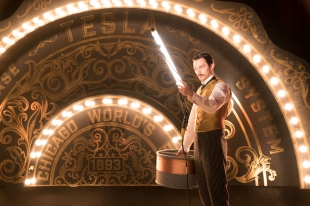 What does it take to get a big idea from concept to execution? In a real sense, it takes a village, from laboratory laborers to inglorious investors, but nothing happens without first the spark of inspiration. Even as Alfonso Gomez-Rejon's "The Current War: Director's Cut" turns the complicated story of American electricity into a digestible drama, its commentary reminds us of the slipperiness of history in assigning credit for monumental innovation.

Inspired by True Events, "The Current War" spans from roughly 1880 -- and the launch of the light bulb -- to 1893, with the Chicago World's Fair as the testing ground and showcase for an electrical grid able to power a city. In between, entrepreneurial inventor Thomas Edison (Benedict Cumberbatch) and shrewd industrialist George Westinghouse (Michael Shannon) battle -- or, perhaps more accurately, race -- to establish the electrical-current standard: Edison backing the inefficient direct current and Westinghouse the smarter, cheaper alternating current endorsed by then-anonymous inventor Nikola Tesla (Nicholas Hoult).

Originally conceived as a stage musical, Michael Mitnick's screenplay has come a long way, as evidenced by the "Director's Cut" subtitle appended to "The Current War." Under the auspices of the now shamed and dissolved Weinstein Company, Gomez-Rejon premiered a rushed-to-market cut two years ago at the Toronto International Film Festival. After a poor reception and a very public implosion for former film producer Harvey Weinstein and the company that bore his name, "The Current War" found its release postponed, allowing Gomez-Rejon to get back to work. The newly released "Current War" includes footage from reshoots, five newly added scenes and an overall running time trimmed by 10 minutes.

What remains is far from perfect, but a decent primer on the broad strokes of the AC/DC conflict. The arrogance, obsessiveness and sheer industriousness of Edison play against the frustrated horse sense of a well-mannered Westinghouse. As Cumberbatch flop-sweats to show Edison's maniacal tunnel vision, Shannon quietly walks off with the picture, confidently holding the screen with radiant intelligence and subtle comic reactions to the absurdities and indignities Westinghouse encounters. As ever, Tesla gets short shrift, his role acknowledged but strictly supporting while the "great men" fight over dollars and access.

The filmmakers capture something about the egotism and toxic masculinity that shaped this particular history, as well as the second guesses and ethical compromises that haunt progress (let's just say that the invention of the electric chair figures into the current war). This is Hollywood history, so accurate chronology takes a backseat to dramatic impact, character becomes caricatured, and developments get simplified. In the most egregious example -- coming as it does from filmmakers who clearly know better -- "The Current War" implies that Edison single-handedly invented the cinema.

Though less than the sum of its parts, "The Current War" proves anecdotally fascinating, enough to hold dramatic interest. Gomez-Rejon manages some impressive period recreations -- most notably the Chicago World's Fair -- and revels in the strange stories along the way, like the ill-fated elephant (and too-credulous press corps) ruthlessly exploited in Edison's attempt to discredit his competition. After two hours spent apart, Edison and Westinghouse stand face to face for a truce-like discussion, civil at last. It's a dramatically satisfying exhale after a sprint through history that's sometimes dumbed-down and sometimes reflective on the ways money talks and reason walks on the road to progress.

These local restaurants are donating meals to Bay Area residents in need. Here's how to help.
By Elena Kadvany | 6 comments | 11,484 views

Coronavirus: Plan ahead now for a big outbreak
By Diana Diamond | 20 comments | 4,369 views

The first few seconds after awakening; before I remember the virus
By Chandrama Anderson | 0 comments | 1,220 views