Return of the cheekbones

Angelina Jolie flies through the motions in 'Maleficent: Mistress of Evil' 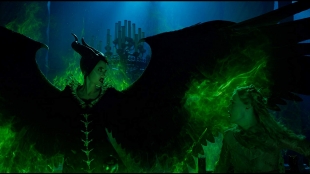 Sometimes a sequel has a way of making its predecessor seem better in retrospect. Disney's 2014 "Maleficent" was no great shakes, but its reimagining of "Sleeping Beauty" -- both the Charles Perrault fairy tale and its 1959 Disney-animated version -- at least had that sturdy narrative spine with which to play chiropractor around Angelina Jolie's strikingly vampy Maleficent. "Maleficent: Mistress of Evil" feels spineless with its tortured semi-tragic antihero turned into a slightly misanthropic soccer mom who likes wearing black.

Turns out Ingrith roughly corresponds to the original conception of Maleficent as a poorly motivated evil villain. She's a low-down racist against the fairies and other woodland creatures that live in the Moors where Aurora reigns as queen and Maleficent lurks around with longtime companion Diaval the raven (Sam Riley, when in human form). The union represented by Aurora and Phillip be damned, Ingrith's gonna blow it all up with a sinister smile. At least someone's having fun. Meanwhile, Maleficent seems crowded out of her own movie after the first act's drawing-room comedy.

The piecemeal script, no doubt a result of original screenwriter Linda Woolverton being rewritten this time by at least two others, dabbles in meanings as if nibbling at hors d'oeuvres.

To the tune of hundreds of millions of dollars in profit, this franchise gets a pass from audiences by putting women front and center, with the plot divvied up among Jolie, Pfeiffer and Fanning and the men relegated to sidekick (Riley), spouse (Lindsay) and cleavage-revealing himbos (Dickinson and "bad boy" Ed Skrein as one of Maleficent's heretofore unknown brethren). That's an all-well-and-good feminist corrective, albeit orchestrated by male director Joachim Ronning ("Pirates of the Caribbean: Dead Men Tell No Tales").

"Mistress of Evil" dully flirts with its implications rather than productively digging into them. There's a bit about Aurora asking her mother to cover her horns with her scarf that serves as an anti-shame object lesson (a passing reference to Maleficent's exaggerated "killer of men, destroyer of armies" reputation could have served as an allegory for hurtful gossip and bullying). Beyond that, "Mistress of Evil" settles for passing fantasy-war-movie platitudes about love conquering fear to achieve "harmony and peace" (ironically capped by an up-with-elitism royal wedding that can't wait, fallen dead be damned).

Audiences can't be blamed for turning off their brains and focusing on the aesthetic trappings. Certainly, Ellen Mirojnick's beautiful costumes impress, as does the visual riot of photo-realistic -- if pastel-painted -- backdrops, unfortunately still populated with uncanny-valley CGI creatures. "Maleficent: Mistress of Evil" can afford all that, plus guest stars like Chiwetel Ejiofor and Imelda Staunton, but in this film featuring a flying protagonist, nothing really lands.

It's a kid's movie though, right? Would children enjoy it? Someone who might not feel the need to dissect it like an adult reviewer?
Seems like the review is for the demographic this film is not aimed at.

There's a reason why the MV Voice is not a respected publication for movie reviews. This review stinks!

These local restaurants are donating meals to Bay Area residents in need. Here's how to help.
By Elena Kadvany | 6 comments | 11,480 views

Coronavirus: Plan ahead now for a big outbreak
By Diana Diamond | 20 comments | 4,368 views

The first few seconds after awakening; before I remember the virus
By Chandrama Anderson | 0 comments | 1,220 views