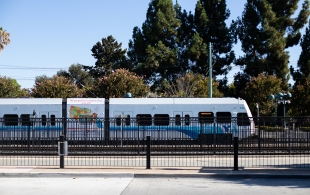 In particular, the grand jury report took aim at the county's light rail system, which it proposed dismantling entirely. Photo by Magali Gauthier

VTA is a mess. Not only the most inefficient system, but we need regional transport which VTA does not provide.

Where are the efficient bus routes to airports, to the coast, crossing the Bay? Why are services limited and snaking around neighborhoods? Why don't we have park & drive lots with efficient shuttles to Caltrain and business areas? And why does VTA only consider San Jose rather than the whole county?

The reason they get so few riders is because their services are pathetic, slow, expensive particularly if you need more than one bus, and dirty. We need fast, efficient, clean, comfortable buses with wifi to get workers from where they live (south county, the coast,) to places of employment.

VTA just can't do the sorts of job Google buses, Facebook buses, Apple buses, etc. do for their employees. We need some of their people to show VTA and the rest how to do it right.

"…the grand jury report proposed restructuring the agency's governance by having VTA board members directly elected by voters..."

I somehow don't think that will solve anything. The average voter isn't going to know who is good or not.

Report Objectionable Content
Email Town Square Moderator
5 people like this
Posted by Michael Brownrigg
a resident of another community
on Aug 16, 2019 at 6:53 pm

We definitely need better regional transit, that is for certain, up and down the Peninsula. What I find surprising about this report and response is the strong sense that the Board is the problem. What about management? They are supposed to be the experts. In the private sector for 20 years and public service for 30, I cannot think of a lot of enterprises or agencies that were well run by committees. Boards should help a CEO/ED course correct, provide a sounding board, help promote the business and, if the CEO fails or comes up short, replace him/her. I would be more interested to learn how VTA plans to improve management talent than Board talent, to be honest.

SRB is a registered user.


I hope that the VTA Board will also consider moving to a directly elected board. That would insure commitment and dedication to the position. This might also restore some geographic and political balance (right now San Jose has nearly full control of that regional agency).

A more immediate step could be to change the way PA/MV/LA/LAH rotate their representation (each city gets a turn, 2 year term every eight years). At a minimum get LA and LAH to share their turn, maybe even drop LA/LAH from the rotation (these cities have very little transit and staff to support a VTA representative).

Report Objectionable Content
Email Town Square Moderator
11 people like this
Posted by Gary
a resident of Sylvan Park
on Aug 17, 2019 at 12:51 pm


Is the VTA so inefficient and disoriented just because some or all of its part-time Board members do not even read the agenda packets for monthy meetings? I have not observed a VTA Board meeting for some time. The meetings are streamed online nowadays. I was there a few years ago when some mostly Hispanic merchants were seeking some minimal compensation for not being able to operate amid a long-delay in street reconstruction east of downtown San Jose. The VTA was adding BUS-Only Lanes and new bus stops - something it planned and pushed for all of EL CAMINO REAL and STEVENS CREEK. The VTA Board discussed at length how generous the VTA was being to these unfortunate merchants - setting up a process to dole out tens of thousands of dollars. As I recall, the VTA was seeking a new contractor to finish the job. The next item was a unexplained cost overrun for some project totaling $17 million. I had signed up to ask about it. But the chair forgot to take public input. All in favor? Yes - Unanimous. No questions asked. Point of order, I said (which really is only available to members of the legislative body). The chair (then a councilmember from Morgan Hill) said he forgot to call me - go ahead. I then pointed out that the VTA bureaucracy and Board had just spent a half hour discussing a couple of dollars for Hispanic merchants - making sure they knew their claims would be under penalty of perjury - but then had approved a $17 million cost overrun for some corporate construction company - no real explanation provided (in the agenda packet) and no questions asked. Mountain View Councilmember John McAlister was not then a member of the VTA Board. But he has been a member for some time. Maybe he will write a guest column on what he has tried to do to repair the VTA or its Board during his tenure. Just blaming other part-time VTA Board members for not reading agenda packets is not quite enough.

Report Objectionable Content
Email Town Square Moderator
22 people like this
Posted by Steve Ly
a resident of another community
on Aug 17, 2019 at 2:21 pm

The grand jury was critical of the just-approved VTA light rail extension to Eastridge, but for some reason is silent about the wasteful BART extension from San Jose to Santa Clara. This wasteful line duplicates Caltrain and VTA 22 and 522 service. Stopping the BART extension at the Santa Jose Caltrain would save VTA about a billion dollars for something else.

And VTA often has to needlessly reinvent the wheel. For example, although BART has a logical parking policy where "If you arrive after 3pm and leave before 4am, (or all day on weekends) parking is free." Stupid VTA has decided to reinvent the wheel at Milpitas and Berryessa and charge for parking 24/7. That will just result in people either driving to a station with the more reasonable policy or driving all the way.


Report Objectionable Content
Email Town Square Moderator
7 people like this
Posted by Gary
a resident of Sylvan Park
on Aug 17, 2019 at 3:50 pm


I trust that at least North County's representative on the VTA Board of Directors, City Councilmember John McAlister, has done all he could to stop such wasteful spending by the VTA. Councilmember McAlister should chime in right here on this thread and then supply that guest column for the Mountain View Voice (and other newspapers) I suggested above.

Just wait till the county makes car travel nearly impossible, they will call it a “road diet” just like Palo Alto does, They will turn lanes into Bus Express routes. They will force you onto VTA wether you like it or not, in the name of ridership increases

Report Objectionable Content
Email Town Square Moderator
5 people like this
Posted by Gary
a resident of Sylvan Park
on Aug 18, 2019 at 11:14 am


Yes. That is one way to increase ridership. Prohibit the driving of cars and trucks in some or all lanes - and/or create toll lanes. Some rich people love toll lanes. Years ago, there were carnivals with donkey rides. The donkeys would walk in a circle. The riders did not get anywhere. And so I suggested, in response to the plan for bus-only lanes on El Camino, that if the VTA operated a fleet of donkeys, the VTA would likely be proposing DONKEY-ONLY LANES. Maybe the VTA will also buy some elephants - just to appear bipartisan. The VTA might support anything that increases its income and secures its future. The movie THE BLOB comes to mind.

Report Objectionable Content
Email Town Square Moderator
4 people like this
Posted by Frank
a resident of another community
on Aug 19, 2019 at 8:07 am

Another community newspaper is reporting that Palo Alto wants its own representative on the VTA board. There is also discussion of creating yet another bureaucracy to distribute transportation money to cities. Just what we need, another bureaucracy.

While I agree that the VTA Board has done a poor job of managing the VTA General Manager and top staff, and that problem mostly results from the way the Board members are selected and serve. However, I can't figure out why neither the Board nor VTA management has entertained the concept of replacing the $5B BART Burrow extension with modern transit? The area between Berryessa and Diridon could get a network of 100 miles of elevated guideway and 100 small stations providing far better 24/7 service for just $1.5B. Who would not want that deal? Here's the short story:
Web Link

Portland's Thai food darling Pok Pok will be popping up on the Peninsula this spring
By Elena Kadvany | 2 comments | 3,499 views

Flying: How to lower your impact
By Sherry Listgarten | 18 comments | 2,909 views