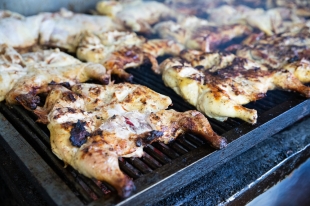 A chicken grilling at Michoacan Produce Market in Redwood City on July 22, 2019. Photo by Magali Gauthier.

3 people like this
Posted by No thanks
a resident of Another Mountain View Neighborhood
on Jul 26, 2019 at 2:16 pm

Report Objectionable Content
Email Town Square Moderator
3 people like this
Posted by Expensive
a resident of Rengstorff Park
on Jul 27, 2019 at 2:59 pm

Anne Le Ziblatt, formerly of Tamarine and Bong Su, is back with a Vietnamese noodle bar in Redwood City
By Elena Kadvany | 7 comments | 3,848 views

You Can Help: Scents and Migraines
By Chandrama Anderson | 0 comments | 1,315 views