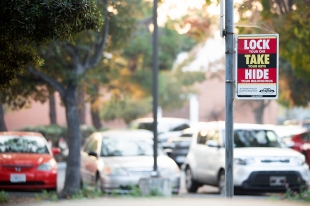 A sign in the Century Cinemas 16 parking lot encourages moviegoers to lock their vehicles and keep their belongings out of plain sight. Photo by Magali Gauthier

Also, it is also well known that the numbers quoted are actually lower than the actual number of thefts / burglaries. For all those that report their loss to the police there are still a number of people who do not take the time to report the crimes to police since they feel police are not going to be doing anything and don’t even come out to speak to them about being a victim. I am one of them. My vehicle was broken into and they stole a bag with emergency supplies and clothing. When I called Mountain View Police Department before I could even tell them anything they told me to report the crime online. At least give me the option. Poor customer service. But this is probably the normal elsewhere. Don’t the cops want to come out and see if there are any cameras near by or see if anyone saw anything?

Note to the editor: Your verification code system needs improvement. On many devices you can not make a lowercase letter for the first letter in the code. Took several times to push a comment through.

Pretty simple guys. Half the issue is that these thieves know you leave your stuff in there. Stop it! How many times do you have to be told to take your valuables with you?

Can we just have the police setup bait cars to get these guys off the street. Setup a Tesla with a backpack in the bag. Thief gets to pay for car damage + fine. Let's get this going.

Report Objectionable Content
Email Town Square Moderator
17 people like this
Posted by Neighbor
a resident of another community
on Jul 19, 2019 at 12:15 am

Well, California politicians reduced the charges and penalties for this crime. Criminals are emboldened and police don’t have time to bother investigating. It doesn’t matter one whit whether you have anything in your car or not. California politicians are nowadays prioritizing the “rights” of criminals over citizens and legal residents, members of the public who are increasingly victimized by musguided policies and laws. Way to go, wrecking California.

Report Objectionable Content
Email Town Square Moderator
13 people like this
Posted by Robyn
a resident of another community
on Jul 19, 2019 at 1:25 am

The police do not prevent crime. They react to it.
We must accept responsibility for protecting ourselves and our property.
With the increase in population we should anticipate an increase in crime.

Report Objectionable Content
Email Town Square Moderator
10 people like this
Posted by Bummed
a resident of Shoreline West
on Jul 19, 2019 at 4:28 am

My car was broken into as well. I had nothing in it and was just going to lunch at In-n-Out. Like “Data Data” said I didn’t bother to report it either when I was told by the woman answering phones at the police that they don’t take those reports in person and stressed that I needed to report it online. Never-mind then.

Report Objectionable Content
Email Town Square Moderator
10 people like this
Posted by PA Resident
a resident of another community
on Jul 19, 2019 at 7:28 am

The problem is no longer what you leave in sight, particularly if you drive a Tesla. The thieves are breaking window to open trunk to see what has been left.

When I was a victim of this, in Mountain View, I had left nothing in the car and the only thing in the trunk was a couple of empty grocery bags. MVPD told me that thieve break in to cars in the offchance that something worth stealing might be there in the trunk.


Report Objectionable Content
Email Town Square Moderator
13 people like this
Posted by Less stress
a resident of Cuesta Park
on Jul 19, 2019 at 1:41 pm

I have lived in Mountain View for over 26 years now, but pretty much stopped going to downtown Mountain View over a year ago, and instead regularly patronize downtown Los Altos...where there is easy parking, no worries about smash and grab crime, and plenty of good restaurants & nice shops to patronize. The post office there is a breeze as well.

Sadly, it’s just not worth the added stress to deal with downtown Mountain View anymore.


Report Objectionable Content
Email Town Square Moderator
10 people like this
Posted by Interesting
a resident of another community
on Jul 19, 2019 at 2:26 pm

Re the post I had my car smash/grabbed 2x in Los Altos. Once outside the Los Altos grill and in a lot behind Pete's on State street.

I think feeling safe is a perception. I feel fine in MV. I've never had a single issue in MV and go to the DT area frequently, day and night.
It's based on one's individual experiences

Portland's Thai food darling Pok Pok will be popping up on the Peninsula this spring
By Elena Kadvany | 2 comments | 3,529 views

Flying: How to lower your impact
By Sherry Listgarten | 18 comments | 2,926 views