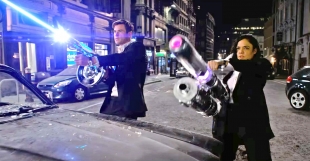 Let's be honest: Film critics see too many movies, so when they start throwing around words like "wearying" and "tiresome," take them with a grain of salt. The sci-fi sequel "Men in Black: International" is wearying. It's tiresome.

Twenty-two years ago, "Men in Black" presented a fresh high-concept (albeit adapted from a comic-book series) about anonymous government agents tasked with saving the Earth while keeping the secret of aliens among us. Back then, Will Smith referred to the Men in Black agency's mind-wiping neuralizer as a "flashy thing," which also ably summed up the film in which the device appeared. But all the flash and dazzle packed in plenty of wide-angle witticism from director Barry Sonnenfeld and screenwriter Ed Solomon, along with the odd-couple chemistry of Smith and Tommy Lee Jones.

Two sequels floundered in their attempts to extend the fun, and now, with Smith and Jones retired, an attempt to resuscitate the franchise arrives under the "International" banner. The fourth film skews younger by pairing Chris Hemsworth with his "Thor: Ragnarok" co-star Tessa Thompson under the direction of F. Gary Gray ("The Fate of the Furious"). Providing the link to 2012's "Men in Black 3," Emma Thompson (no relation) reprises her role as New York bureau chief Agent O. When Tessa Thompson's enthusiastic Molly Wright takes the initiative to barge her way into MIB HQ, Agent O christens the young woman Agent M and bundles the probie off to the London branch.

In like fashion, Agent M imposes herself on Hemsworth's lone-wolf Agent H, a tall drink of water described by one fellow employee as "yummy," but one who's also mysteriously lost his mojo since saving the world three years earlier in Paris. Repeatedly described as a "changed" man, this reckless rogue nevertheless vibes a rakish James Bond quality that, like the film, risks smarm over charm. Some of the awkwardness here owes to a plot (spun by "Iron Man" co-screenwriters Matt Holloway and Art Marcum) involving a mole hunt in the London branch. Is the traitor Agent H? Perhaps it's his former partner and current bureau chief High T (Liam Neeson)? Or the priggish/jealous Agent C (Rafe Spall)?

Meanwhile, the universe hangs in the balance again, this time over the fate of a weapon of mass destruction that travels in roughly the size and shape of a Christmas bow. The Men in Black -- and, errr, also, y'know, Women in Black -- keep bungling the game of hot potato played against Agent H's arms-dealer ex Riza (Rebecca Ferguson) and "the most vile creatures in the entire universe -- the Hive" (embodied by first-time film actors Les Twins, a.k.a. Laurent and Larry Bourgeois). Along the way, everyone's favorite geek Kumail Nanjiani adds value by voicing pint-sized Pawny, an alien who pledges fealty to his new "queen" Agent M.

Outside of the win for representation represented by the likeable Tessa Thompson's leading role, there's no creatively compelling reason to tell this story, which -- not for nothing -- drags on seventeen minutes longer than the 1997 original. Though basically competent by noisy, empty blockbuster standards and graced with amusing byplay between the leads (with one-liner assists lobbed by Nanjiani), "Men in Black: International" amounts to another boilerplate spy/sci-fi comedy with gags and situations we've, in most cases, literally seen before in the previous installments. As a result, the greatest impression left by "MIB: I" is that of another joyless cash-grab franchise exercise. It may make you start to feel that you, too, see too many movies.

These local restaurants are donating meals to Bay Area residents in need. Here's how to help.
By Elena Kadvany | 6 comments | 11,496 views

Coronavirus: Plan ahead now for a big outbreak
By Diana Diamond | 20 comments | 4,382 views

Will the Coronavirus Save Lives?
By Sherry Listgarten | 29 comments | 4,050 views

The first few seconds after awakening; before I remember the virus
By Chandrama Anderson | 0 comments | 1,230 views