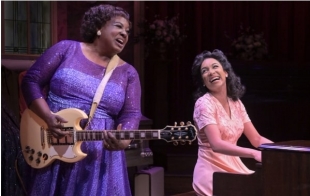 "I can think of no better way to begin our 50th anniversary season than with this highest honor, a testament to the passion and imaginative spirit of many," Kelley stated in an announcement online and sent to supporters.

The Regional Theatre Tony Award is given annually to a non-Broadway theater company and is based on recommendations from the American Theatre Critics Association. It carries with it a $25,000 grant.

The honor comes at an especially poignant moment for Kelley, who will step down as artistic director at the end of the 2019-2020 season, his 50th year since founding the company in 1970.

TheatreWorks, he noted in a recent interview with the Weekly, has long been dedicated to fostering diversity and nontraditional casting and nurturing emerging talent and work.

The award ceremony will be broadcast live from New York City on CBS at 8 p.m. Sunday, June 9.

Ellen Wheeler is a registered user.


Congratulations, TheatreWorks! I'm glad the Tony's are recognizing your excellent work. We in Mountain View and Palo Alto feel like you're a hidden gem (now not so hidden!). I've already calendared to watch this year's Tony's on Sunday, May 9th.

Ellen Wheeler is a registered user.

The first few seconds after awakening; before I remember the virus
By Chandrama Anderson | 0 comments | 2,396 views

Can you Stay Healthy without Making More Trash?
By Sherry Listgarten | 2 comments | 1,690 views

Think about helping others in our coronavirus-affected area
By Diana Diamond | 2 comments | 1,562 views