'Teen Spirit' smells familiar but has its charms 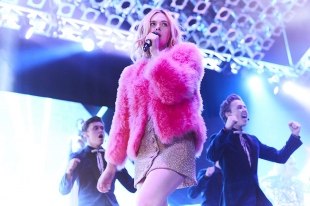 Is there an unwritten rule that actors-turned-directors must debut with pop music dramedies? Tom Hanks first went behind the camera for 1996's "That Thing You Do!," and Bradley Cooper helmed last year's "A Star is Born." Now Max Minghella ("The Social Network") helms "Teen Spirit," another take on the rise-from-obscurity pop star archetype.

The movie serves mostly as a vehicle for star Elle Fanning, who provides her own vocals in the film's multiple vocal-performance sequences and, more importantly, provides the film its soul of quietly defiant determination.

An English farm girl from the Isle of Wight, Fanning's Violet lives with her Polish-immigrant mother (Agnieszka Grochowska) and the horse that seems to be her only joy. Her need to sing -- acceptably in a church choir and compulsively at an open-mic -- reflects a girl desperate to throw off the yoke of her working-class fate and choose her own path. The open-mic nights introduce her to an aging, slovenly, pot-bellied drinker whose appearance belies his experience. This is Vlad (Zlatko Buric, drily effective), who offers her a ride home and, soon enough, his services as a manager when Violet needs a "guardian" to bless her participation in a reality-show singing competition called "Teen Spirit."

Minghella's script includes all the basics: temptations of fame, a scrappy manager taking his last shot at redemption, a heart-tugging surrogate father-daughter relationship. There's not a bit here that hasn't been done before many times, but Fanning's subtle performance, well observed by Minghella, puts meat on the bones that are the film's cliches.

Obviously it doesn't hurt "Teen Spirit" to have Rebecca Hall ("Vicky Cristina Barcelona") in its side pocket, albeit in the undemanding role of the Simon Cowell-esque pop guru who dangles contracts to lure Violet from Vlad.

"Teen Spirit" wrestles with its own vapidity, but the gambit of keeping the characters' yearning just barely concealed lends the film just enough tension -- and heart -- to hold interest between flashy musical numbers.

The first few seconds after awakening; before I remember the virus
By Chandrama Anderson | 0 comments | 3,353 views

Can you stay healthy without making more trash?
By Sherry Listgarten | 6 comments | 2,766 views

Think about helping others in our coronavirus-affected area
By Diana Diamond | 7 comments | 2,556 views