Clumsy revamp of animated classic still a 'feast for the senses' 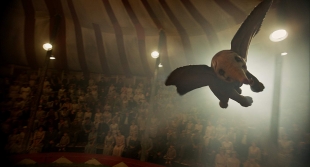 "Dumbo" soars above the circus audience in this remake of the Disney classic. Courtesy of Disney Enterprises.

"Dumbo" is a strange beast, indeed. I don't mean the character of an elephant born with ears so big he can flap them and take flight. And I don't mean the 1941 Disney animated feature starring that elephant. No, I mean Disney's new live-action, CGI-heavy reimagining of "Dumbo," which turns out to be part bland kids-and-animals adventure and part Coen Brothers-esque period satire. The former will get by with kids, and the latter may get by with adults, but few are likely to have an euphoric experience seeing this elephant fly (again).

As is so often the case with the films of Tim Burton, "Dumbo" is less than the sum of its parts, but some of those parts are pretty nifty. The 1941 "Dumbo" told a more or less the straightforward story of an elephant, born with a difference, who learns to make the most of it and find his confidence. That thread can still be discerned in Burton's film, but as scripted by Ehren Kruger ("Transformers: Dark of the Moon"), "Dumbo" has morphed into a fable of modernized entertainment business models and the handling and packaging of intellectual property. If you're thinking that seems like strange thematic material for a PG Disney movie aimed at families, you're right -- and it gets stranger.

Burton's "Dumbo" opens in 1919, when the Medici Bros. Circus tours backwater towns by way of a train named Casey Jr. At the film's outset, a one-armed war veteran named Holt Farrier (Colin Farrell) rejoins the troupe and his children Milly (Nico Parker) and Joe (Finley Hobbins). The children miss their late mother and struggle to connect with the awkwardly uncommunicative Holt, now assigned to elephant wrangling. The arrival of pachyderm newborn Jumbo Jr. -- swiftly redubbed Dumbo following his first disastrous performance -- begins a journey that will change the Farriers and the larger family that is the circus troupe.

The kids discover that Dumbo can fly, and though at first they're not believed, a mishap leads to Dumbo performing his trick before a wowed crowd. And so, in almost equal measure to the story of the Farriers and their elephant charge, this "Dumbo" tracks the conflict between two huckster-showmen: the lovably gruff homunculus Max Medici (an energetic Danny DeVito), who runs the circus, and the dapper exploiter V.A. Vandevere (Michael Keaton) who arrives to offer a partnership with Medici as a way of getting his mitts on star attraction Dumbo.

Vandevere is clearly an avatar for Walt Disney himself. That's the big idea that saves Burton's "Dumbo" from total irrelevance. The old-timey Medici Bros. Circus gets absorbed into Vandevere's giant operation, a proto-Disneyland boardwalk-meets-world's-fair called Dreamland. In an unfortunate bit of synergy for its corporate parent, "Dumbo" arrives just as Disney absorbs the now defunct 20th Century Fox to become a mega-studio, laying off thousands in the process.

Though Burton favors withholding mood lighting, the picture works fine as a family picture, one that's occasionally charming and frequently a feast for the senses: Dumbo's first flight around a stable gives the movie its "Jurassic Park" moment of "wow," with the thunder of leathery, flapping ears swooping through the surround-soundscape.

As usual, Burton isn't making matters easy for his corporate overlords to just sell some plush toys and be done with it. Though he's still clumsy with the story, "Dumbo" has enough wit to deserve an audience.

These local restaurants are donating meals to Bay Area residents in need. Here's how to help.
By Elena Kadvany | 6 comments | 11,503 views

Coronavirus: Plan ahead now for a big outbreak
By Diana Diamond | 20 comments | 4,388 views

Will the Coronavirus Save Lives?
By Sherry Listgarten | 29 comments | 4,054 views

The first few seconds after awakening; before I remember the virus
By Chandrama Anderson | 0 comments | 1,240 views