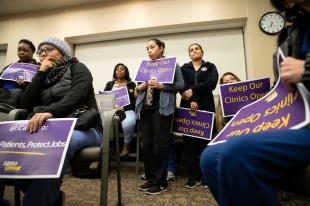 Clinic workers and fellow union members attended the El Camino Hospital board meeting seeking to save the jobs of the roughly 164 employees who work in five of Verity's Santa Clara County clinics, on Feb. 13. Photo by Magali Gauthier

In other news: The Mountain View Whisman School District announced plans to buy 3 schools in Fresno and Eureka.

Portland's Thai food darling Pok Pok will be popping up on the Peninsula this spring
By Elena Kadvany | 2 comments | 3,504 views

Flying: How to lower your impact
By Sherry Listgarten | 18 comments | 2,918 views