'The Wedding Guest' is an inert thriller 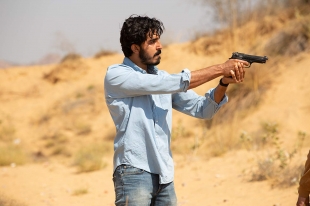 Since making his feature filmmaking debut with 1995's "Butterfly Kiss," Michael Winterbottom ("The Trip," "A Mighty Heart") has averaged a film a year. One might think of him as the English Steven Soderbergh: a prolific filmmaker whose work on the big and small screens is characterized by a frugal fast pace. Unfortunately, Winterbottom's hit-and-miss output arrives at a miss with his latest, an inert thriller called "The Wedding Guest."

Written and directed by Winterbottom, "The Wedding Guest" begins with a long, wordless stretch as we watch a grimly determined man pack a bag, make his way through airport security and fly to Eastern Pakistan, where he purchases two handguns and readies them, along with a roll of duct tape, for some presumably horrific crime. The man, we soon learn, is a mercenary named Aasif (Dev Patel of "Slumdog Millionaire"), and his mission requires him to kidnap Samira (Radhika Apte), a young bride-to-be, on the eve of her arranged marriage.

In most thrillers, this setup would mean we're off to the races, but "The Wedding Guest" plods along with a minimum of character development and chemistry between its leads. The pair abscond to India to see through Aasif's job, which turns out not to be entirely objectionable to his hostage. After all, her marriage was to be an arranged one, which lends the film a patina of pointedness. But Winterbottom isn't interested here in exploring the themes he superficially teases, about arranged marriages, our expectations of Muslim terrorism or the self-serving dynamics within dubious relationships.

If "The Wedding Guest" is interested in anything, it's tinkering with some humble neo-noir plot dynamics, but I'll be damned if I can detect a pulse as Aasif and Samira walk past or drive through the evocative scenery of urban India, although we're meant to feel "will they or won't they?" suspense as the pair kills time in restaurants and hotel rooms. Eventually the duo meets with the mutual acquaintance (Jim Sarbh), who sets the plot in motion.

The plot and characters, however, quickly fizzle, leaving us to appreciate the film's humble trappings -- that scenery and a convincingly dour, tough performance by Patel, who's better known for his goofy, gawky comic roles. If Winterbottom's going to make a near-pointless film, he might as well have fun with it or make some effort to entertain his audience, but "The Wedding Guest" proves deliberately withholding, as if to punish us, along with its unlikeable characters, for expecting too much.

The first few seconds after awakening; before I remember the virus
By Chandrama Anderson | 0 comments | 2,415 views

Can you Stay Healthy without Making More Trash?
By Sherry Listgarten | 2 comments | 1,701 views

Think about helping others in our coronavirus-affected area
By Diana Diamond | 2 comments | 1,601 views