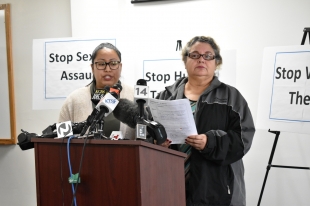 Restaurant worker Magaly Mata, who said she is owed $22,500 from her former employer. Courtesy of Bay City News Service

Victims of wage theft in Santa Clara County asked the Board of Supervisors Monday to properly enforce existing laws designed to protect workers and their labor rights.

The board was set to decide Tuesday, Feb. 12, whether to increase funding for the new Office of Labor Standards Enforcement, established last year, and broaden its purview.

In advance of the meeting, caretakers, restaurant workers and labor activists gathered to ask that these protections be inclusive of all industries and individuals that are often targets of wage theft.

This includes women and people of color, those that are undocumented, and many who do not have the language proficiency to advocate for themselves, said Derecka Mehrens, executive director of Working Partnerships USA.

She and others pushed for expanded funding, especially for those who have been successful in filing claims against their employers, but have not received their settlements.

Restaurant worker Magaly Mata said she worked around the clock at a San Jose restaurant between 2015 and 2016, then won a case against her employer when they refused to pay her. Still, she said, she hasn't received "one cent" of the $22,500 settlement.

"I know I'm not the only one, I know there are many workers in other industries that are going through the same thing," she said.

Wage theft can include not paying overtime, only paying in tips, forcing work "off the clock" and not paying fairly for work invested, Jenny Higgins-Bradanini, president of the Women's March Bay Area, said.

She said many also face retaliation, sexual harassment and human trafficking, and the county has the ability to obstruct "modern day slavery" by deciding to expand their scope of enforcement on Tuesday.

"Tomorrow's vote will not begin an immediate halt to these crimes committed by employers ... but this is a critical step in moving justice forward to the protection of our bodies and our labor," Higgins-Bradanini said.

Mehrens said the county has approved "community-based enforcement," a model that will empower workers to speak out about mistreatment by pairing the public sector with community-based organizations. It is partnering with Working Partnerships USA and using the construction industry as a pilot for this model.

"Although we have many good laws on the books, laws on the books aren't self-enforcing," said Ben Field, executive officer for the South Bay AFL-CIO Labor Council, describing "rampant problems" with labor law violations.

Supervisor Cindy Chavez has thrown her support behind a larger budget and said it will help grant victims their full settlements, protect workers in multiple industries and effectively double the office's impact.

The board meeting started at 9:30 a.m. in the chambers at 70 West Hedding St. in San Jose.

County Supervisor Cindy Chavez is significantly to the left and a member and LEADER of the South Bay Labor Union that is behind this.

The real story is the South Bay Labor Union's desire and goal to expand its membership.

The judicial system worked for Ms. Mata. However, you still cannot obtain money from dishonest people (unless you enforce debtors' prison, which even Ms. Mata would probably oppose on other grounds). I have a significant outstanding judgment on a former customer that I have not been able to collect because the assets are in other people's names, namely his wife or former wife as it appears to be a long divorce proceeding and protracted bankruptcy. The debtor knows how to manipulate the system and I do not have the resources to constantly pursue.

The first few seconds after awakening; before I remember the virus
By Chandrama Anderson | 0 comments | 3,353 views

Can you stay healthy without making more trash?
By Sherry Listgarten | 6 comments | 2,765 views

Think about helping others in our coronavirus-affected area
By Diana Diamond | 7 comments | 2,556 views