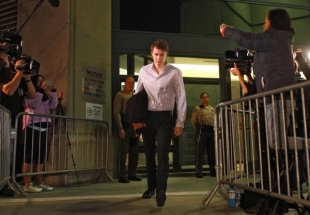 Former Stanford University student-athlete Brock Turner, who was convicted of sexual assaulting an unconscious and intoxicated woman on campus in 2015, exits the Santa Clara County Main Jail after serving three months of a six-month sentence on Sept. 2, 2016. Photo by Veronica Weber.

In a brief filed in the 6th District Court of Appeal on Friday, the California Attorney General's office argues that former Stanford University student Brock Turner's recent appeal of a 2016 sexual assault conviction is "unavailing" and "baseless."

The 95-page brief rejects Turner's arguments for a new trial listed in Turner's appeal filed by a Mill Valley attorney on his behalf in December, arguing that he was deprived of his right to due process in his original trial and that the jury was prejudiced for several reasons.

Turner's appeal argued that evidence of his credibility and honesty was "erroneously" excluded during the trial and the jury was influenced by "extensive 'behind-the-dumpster' propaganda" by the prosecution, who described the assault as taking place behind a dumpster outside the fraternity house where Turner and the young woman met.

The response brief, which is signed by Attorney General Xavier Becerra and three high-level staff members in his office, states that Turner's claims "lack merit" and cannot "separately or together infringe on (his) state or federal constitutional, statutory, or other legal rights."

The attorney general argues that Turner's honesty was not relevant to the crimes he was accused of, compared to a person charged with bribery or theft, for example. The brief notes that several character witnesses testified on Turner's behalf and that the judge who oversaw the case, Aaron Persky, rightly limited their testimony to Turner's character related to "sexual morality" rather than credibility.

"Honesty is out," Persky said during the trial, according to an excerpt included in the response brief. "High moral character as it relates to sexual assaultive behavior is in."

Persky gave the defense and prosecution an opportunity to respond to his ruling, and neither objected, according to the brief.

While the credibility of the accused and accuser would be relevant in many sexual assault cases, the amount of "independent" evidence in this case made it unusual, the attorney general argued, from the graduate students' eyewitness testimony to the results of a Sexual Assault Response Team exam, a medical exam administered following a suspected sexual assault.

The brief also rejects Turner's argument that there was insufficient evidence for his convictions. For the most serious felony, assault with intent to commit rape, the appeal argued that "weight of the evidence" shows that Turner "did not (intend) to have sexual intercourse with Ms. Doe but rather to engage in sexual contact short of sexual intercourse."

The attorney general argues that Turner's actions at the fraternity party prior to the assault, as testified to by the prosecution's witnesses, his "act of taking (Doe) to a secluded location, the state of (her) clothing when she was discovered," the graduate students' observations and the fact that Turner fled when the students confronted him provided sufficient evidence to support that conviction.

"Substantial" evidence was also presented during the trial to prove that Turner knew or should have known that Doe was intoxicated to the point of unconsciousness, the brief states.

Turner testified that Doe verbally consented to the sexual activity they engaged in and that she was conscious and responsive throughout all of their interactions that evening.

The attorney general found that the prosecution did not engage in misconduct by referencing the dumpster, the location where the assault occurred, during questioning. Her comments "reflected the testimony and the evidence" and "did not infect the trial with unfairness and do not constitute a deceptive or reprehensible attempt to persuade the jury," the brief argues.

Good! Now we just need to get rid of Persky

Appeal has no chance is a registered user.


Unless the dumpster was actually another frat house, it seems from the article's summary that Brock Turner's appeal has no chance of producing a reversal and new trial. But suppose he got a new trial. After it, he might be sent to prison after all.

The first few seconds after awakening; before I remember the virus
By Chandrama Anderson | 0 comments | 3,346 views

Can you stay healthy without making more trash?
By Sherry Listgarten | 6 comments | 2,759 views

Think about helping others in our coronavirus-affected area
By Diana Diamond | 7 comments | 2,554 views