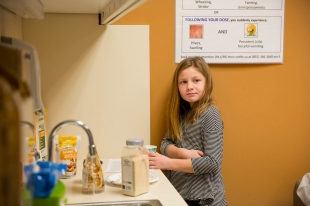 I think this is fantastic. Glad to see that people are being helped!

One correction to the article, though. I think it’s very important to correct this in the context of this important work, so that parents don’t wrongly blame themselves, and (as many researchers now contend) so that people don’t make dangerous mistakes on a wrong-headed belief that we “are too clean”.

The article above says:
“While the jury is still out on what's causing the sharp increase, one of the prevailing theories is the so-called hygiene hypothesis: The idea that creating a germ-free environment for children at a young age weakens the immune system, making the body more likely to rebel against common food allergens.”

While the jury is indeed still out on the cause, the mainstream of the research community seems to have long moved beyond this interpretation, which is currently viewed as dangerous in an urban-legend-like way, encouraging poor hygiene. Hygiene isn’t the absence of germs, hygiene means practices that reduce the spread of infectious diseases - which could even mean encouraging a healthy microbiome, it does not necessarily mean sterility (depending on the context).

Read this very recent article in the Proceedings of the National Academy of Sciences:

“[The] hygiene hypothesis,” first proposed in 1989 ... has become enshrined in popular culture: ... many scientists are eager to see it thrown out.”

“”We know ... why our immune system’s regulation is not in terribly good shape, and it’s got absolutely nothing to do with hygiene””

“The hygiene hypothesis is a “dangerous misnomer ...”

“ Still, the catchy hygiene hypothesis continues to be widely embraced by the public, the media, and even scientists”

I've had the pleasure of working with Whitney and she is simply amazing. She was with us from the first day of my son's treatment to the very last day 3 years later, and was always such a source of both comfort and knowledge. I can't say enough good things about her.

OIT works - it has been life changing.

Report Objectionable Content
Email Town Square Moderator
4 people like this
Posted by Maher
a resident of Martens-Carmelita
on Jan 15, 2018 at 3:10 pm

Hooray! Now if only the drug prices are affordable. Don't hold your breath. Big Pharma in this country are unrestricted and price gouging is the norm. We need a national health plan (single payer) like every other "1st world" country on the planet. Yeah! when pigs fly.

Report Objectionable Content
Email Town Square Moderator
8 people like this
Posted by Alex M
a resident of Willowgate
on Jan 15, 2018 at 8:04 pm

Alex M is a registered user.


I don't see why companies feel the need to replace prescribed oral microdoses of allergens with more drugs. Just keep up the research on how to determine the dosage for each patient, until it becomes a mainstream dietary treatment and regimen. No need for pills or drugs here.

Report Objectionable Content
Email Town Square Moderator
3 people like this
Posted by @Maher
a resident of Another Mountain View Neighborhood
on Jan 16, 2018 at 8:54 am

You mention only a small part of the big picture. Pharmaceutical companies will sell you their drugs directly for cheap if you prove to them a hardship case, not all, but some. The real problem is the insurance companies. They are the ones who can purchase the drugs for going rates, since they haul in huge amounts of money from the people they insure. Big Pharma just wants a piece of that easy money, by increasing their costs. By doing so, this forces more people to sign up for insurance, since the more people that are insured, the wider the spread to dissolve the costs.

Report Objectionable Content
Email Town Square Moderator
4 people like this
Posted by AJL
a resident of another community
on Jan 18, 2018 at 1:11 am

@Maher,
I highly recommend reading T.R. Reid’s The Healing of America and listening to the archive of his interview on KQED Forum on that book.

It is a myth that every other first-world country has single payer. This is simply not true. Getting this wrong restricts the discussion over what we can do to make our system better and cheaper. Every other first-world country has some form of affordable, universal healthcare. They do not all accomplish this through single payer. Single payer would restrict choice which is an important aspect of quality control. Watch Stefan Larsson’s TED talk about what doctors can learn from each other. There are systems of universal healthcare that preserve choice, which is a better fit for this country.

These are the facts:
The US is the only first-world nation without some form of affordable universal healthcare. The US is the only first-world nation with medical bankruptcies. The US nevertheless has the highest costs per capita, far in excess of the second most expensive country, Switzerland, where many insurance plans will include coverage to recover in a spa in the mountains if you have surgery, and where the minimum salary is over $30/hr. The US healthcare system pays a far larger percentage of the healthcare economy on bureaucracy and paperwork, around a third of every dollar spent, largely because of private for-profit insurance companies. The US does not get the best outcomes in many diseases.

Not all systems are single payer. Some like Germany (the 2nd largest economy and most like us) use employer-based private insurers and private healthcare delivery.

The reason this is important is that insurers make a profit as a percentage of the overall healthcare economy. They have a legal responsibility to shareholders to maximize profit, which is not, as everyone thinks, about reducing the cost of the system or care. They make the most money when the overall healthcare economy is high-cost, not low-cost. The greatest profit comes from maximizing the profit while keeping costs high.

This is why I predicted pharmaceutical costs would skyrocket under Obamacare and wrote as much to my Congressperson. Insurance companies don’t care about minimizing the cost of the system, they care about their control to maximally extract the greatest profit from as large a healthcare economy as the system can bear. So they don’t like change. When Obsmacare allowed insurers to continue making a 20% profit, what could they most easily control to keep the size of the healthcare economy, and thus their profits, high and predictable? Pharmaceuticals. There are only a handfull of players, which makes insurers prefer drugs over even more effective, say, physical therapy, because that would involve negotiating with possibly hundreds of entities rather than a handful. I’m sure by now the insurers have already worked out what will be next if the government regulates the cost of drugs. The incentives are all wrong.

***The one thing the US must do to get a better, more responsive, cheaper healthcare system, is to go back to a system in which all the insurance is non-profit.*** It can still be private, with choice, it just can no longer be a an investment opportunity. That’s it. Switzerland’s powerful private insurers run their health coverage like charities, as they are required by law. But they tried allowing profit for healthcare insurance in the ‘90s. The result - costs skyrocketed and people started going bankrupt. So Switzerland held a referendum and reversed the profiteering of insurance, which reversed the problems. Our own system’s costs started skyrocketing when we allowed for-profit insurance to become so major. The non-profits had to then behave like the for-profits to survive - they have to all be non-profits to work.

I feel I need to point out that non-profit does not mean free or all-volunteer. Employees can still draw handsome salaries, including directors. And the insurers would compete with each other to do a good job in order to keep their jobs. But they would no longer have the incentives to extract a max profit from a high cost system, and costs would go dow, beginning with no need for hundreds of billions in paperwork annually. (Allowing insurance companies to “compete” across state lines will not work and is not the solution either. It is a suggestion that lacks appreciation of real-world insurance behavior and incentives. Insurers only compete to sell a promise, not a product. When people need delivery of the product, the insurance coverage, there is no competition to do the best job. Ask disaster survivors whether all the insurers are falling over themselves to compete to cover them well after a loss, or whether it’s just one or two ethical insurers and most of the others are just trying to manage their image while cheating vulnerable people.)

***The answer is to transition all insurers to non-profit only.*** That’s the single biggest thing we can do. Even the wealthy should care because solutions are best found when everyone gets the best outcomes possible (watch the Larsson TED Talk, the best outcomes per patients also happens often to be the cheapest). Steve Jobs for all his millions and the intelligent problem solving from many doctors, could not buy his 60th birthday. If everyone possible before him had been given the best problemsolving, the subsequent patients including him would have benefited.

I think we should cover everyone, give everyone optimal choice, and if people want free coverage, they can agree to have their outcomes anonymized and contributing to big data solutions. This way, healthcare expenditures would do double duty as research, for those who want free coverage. If we eliminate healthcare Insurance as an investment and simply make all nonprofit, then the hundreds of millions saved every year in healthcare bureaucracy could help pay for the care (which wouldn’t ultimately be more expensive).

Why doesn’t California set up publicly funded labs for creating new pharmaceuticals, too? NASA for curing diseases. Plenty of researchers work for salaries and the chance to make a difference, not because they own the companies and will profit.

Anne Le Ziblatt, formerly of Tamarine and Bong Su, is back with a Vietnamese noodle bar in Redwood City
By Elena Kadvany | 7 comments | 3,542 views

You Can Help: Scents and Migraines
By Chandrama Anderson | 0 comments | 804 views