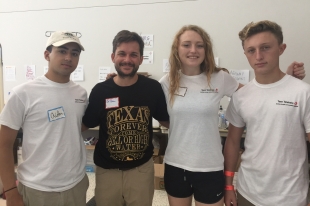 St. Francis High School seniors Aiden Bingham and Catie Bates, along with Bellarmine student Tommy Bates, help out in a makeshift clinic during the Hurricane Harvey relief. The clinic was set up by Dr. Beau Briese (second from left). Photo courtesy of Indu Navar.

MyOpinion is a registered user.


Kudos to Aiden Bingham, Catie Bates, and Tommy Bates, walking the talk, that's what counts. Good job!! You set a great example to all of us. Most of us can only write checks, which is better than hand wringing and pining about 'sending hopes and prayers'on Facebook! But very few of us make the commitment to be on the ground lending a hand to those less fortunate. So proud of you guys, and I don't even know you! Would love to donate to Teen Telehelp, is it a 501c3 (or does it operate under an existing one?)

I'm extremely impressed by these fine young adults. Kudos to their families for raising them well. This goes way beyond fulfilling some generic "volunteer hour" school requirement. I've seen fb posts about giving $10 to the Red Cross and the like, which is nice. But these three went above and beyond, and I'm sure there was other things they could have been doing with their time. Good luck - I look forward to seeing what else you all have in store with that non profit of yours.

Portland's Thai food darling Pok Pok will be popping up on the Peninsula this spring
By Elena Kadvany | 2 comments | 3,530 views

Flying: How to lower your impact
By Sherry Listgarten | 18 comments | 2,927 views