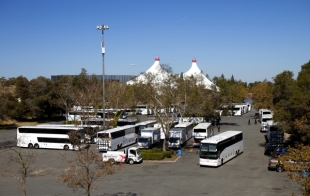 I would have thought they had an App to prevent such a thing.

I/O Attendee is a registered user.


The information in this article is incorrect, as the Mountain View Fire Department spokesperson Lynn Brown's statement was erroneous. This information was since corrected should you choose to be more accurate in your reporting.

Six people weren't injured, and no one had life-threatening injuries. Three people were treated on-site. Three others were in the kitchen but not affected and thus refused treatment. It was a grease fire that was quickly extinguished with the fire extinguishers that were on-site. Someone pulled the fire alarm and since MVFD assumes that a fire at Shoreline involves thousands of people, they sent pretty much every available engine. That caused the news helicopters to flock to the scene, and everything got blown out of proportion.

Andrea Gemmet is a registered user.


Mountain View Fire Department spokesman Lynn Brown has since reaffirmed his initial statement that there were six injured people as a result of the fire.

Portland's Thai food darling Pok Pok will be popping up on the Peninsula this spring
By Elena Kadvany | 2 comments | 3,526 views

Flying: How to lower your impact
By Sherry Listgarten | 18 comments | 2,925 views