Simitian: Agreement with San Jose hospital is 'just a start' 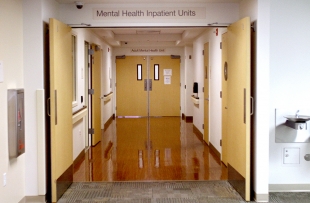 Doors lead to the adult and adolescent psychiatric inpatient unit at the Mills-Peninsula Health Services hospital in San Mateo, where many Santa Clara County teenagers are sent for hospitalization. Photo by Veronica Weber.

Thank you to Supervisor Simitian and his dedicated staff for working so diligently to make inpatient mental health beds for teens available in Santa Clara County for the first time in over 20 years. SJBH is a very nice facility and is located (at 85 and 101) where is can serve many children in need. However, families of teens in the north county still must spend hours in commute traffic each day to participate in their children's care either at SJBH or at Mills in San Mateo. Families of all children who are younger than 14 have no in-county option. These children are commonly sent to Sacramento for care. It's shameful that Lucile Packard Children's Hospital is set to open it's huge, expanded facility without offering any inpatient services for children who need mental health treatment.

Posted by Name hidden
a resident of Blossom Valley


Due to repeated violations of our Terms of Use, comments from this poster are automatically removed. Why?