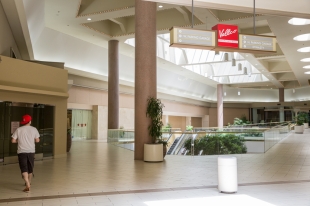 Cupertino's Vallco Shopping Mall is still open even though it is virtually empty. It is slated for a major redevelopment project that includes 2 million square feet of office space. August 8, 2016. Photo by Natalia Nazarova.

Here we go again, number one topic in a basic economics class: rent control. First of all one must be able to do basic math. There is no such thing as "affordable housing" only subsidized housing. With the cost of an average rental unit in Silicon Valley of around 700k (very high land prices) there won't be much "affordable housing" built. Because of the very high educational level and high incomes of Silicon Valley's residents prices have been bid up. Silicon Valley which now includes most of Bay Area is the Manhattan of the west coast. Government is the problem. Cynical politicians go along with what amounts to the mob rule of the renters who want "affordable housing (below market rents)." The key is to dense pack develop building more units per acre like what's happened in cities around the world throughout history. The problem is that Silicon Valley is the scientific capitol of the world attracting avid students of economics. Government is the problem when the politicians fail to even pass high school economics a required subject. Geroge Drysdale a weary economics teacher

6 people like this
Posted by @george drysdale
a resident of Another Mountain View Neighborhood
on Aug 12, 2016 at 7:31 pm

Didn't actually *read* the article, did you?

Or is spamming boards like this with your standard copy-and-paste all you can do?

Rent control, "affordable housing bonds", public transit, etc. don't "spur housing growth", they raise the cost of new housing and discourage new building. After all, who do you think is going to build new houses if they are going to be saddled with ever higher taxes and infrastructure costs, an inability to charge market rates for their rentals, and a political climate in which cities can impose costly restrictions on housing at any time?

People voting for such measures don't have the interests of the community at heart, they simply want others to pay more so that they have to pay less. Of course. These initiatives will raise the cost of housing and make the housing shortage worse and perpetuate it.

We shouldn't let these "advocates" or "coalitions" get away with pretending that they are doing this for "diversity" or the good of society; they are simply greedy and selfish. It is, of course, perfectly legal for people to pursue greedy and selfish goals at the ballot box, but we shouldn't let them get away with misrepresenting what they actually want.

Report Objectionable Content
Email Town Square Moderator
5 people like this
Posted by mvresident2003
a resident of Monta Loma
on Aug 13, 2016 at 7:37 am

mvresident2003 is a registered user.


Touche, well stated MJ. There is a cost to living in one of the most desirable locations, either you can afford it or you can't.

Report Objectionable Content
Email Town Square Moderator
12 people like this
Posted by Kyle
a resident of Monta Loma
on Aug 13, 2016 at 1:09 pm

I'm ok with a rent control measure, because it only applies to older construction apartments, who benefit hugely from Prop 13 while charging bleeding edge rents for dilapidated units. They hike rents aggressively and don't contribute to school funding, etc.

If you really want to reduce long term rental prices, build lots of condos. Individuals dont have front desks that can hike rents and keep a steady flow of tenants renting. Real people will buy and live in the condo and eventually move in to something bigger. They'll either sell it to a new owner, or rent it out to someone at a more reasonable rate, hoping for long term occupancy.

Report Objectionable Content
Email Town Square Moderator
6 people like this
Posted by ivg
a resident of Rex Manor
on Aug 14, 2016 at 8:18 am

@MJ: Agreed! "Community advocates" have campaigned for years to stop housing construction. Now, when the economy is on the upswing and there's no place for newcomers to live, they blame greedy developers and landlords for jacking up prices.

Report Objectionable Content
Email Town Square Moderator
5 people like this
Posted by ivg
a resident of Rex Manor
on Aug 14, 2016 at 8:29 am

P.S: Thank you also to Mr. Noack and Mr. Forestieri for this report, and to Supervisor Simitian.

Ms. Liang Chao has a good point about lack of transportation, but her group has not put forth a credible alternative to the proposed office development. They don't want to build more housing or more transit. Instead, their ballot measure mandates that Vallco remain a shopping center. A successful shopping center creates a lot of traffic. A shopping center that doesn't create a lot of traffic is a vacant white elephant like they already have. At that point, might as well just level the whole place and turn it into a park.

Report Objectionable Content
Email Town Square Moderator
3 people like this
Posted by Linda Curtis
a resident of Cuesta Park
on Aug 18, 2016 at 4:56 pm

Who could afford a condo? Those being built at 1101 El Camino are projected to be starting at 1.2 for a 2 bdrm & 1.1 for a 1 bdrm. The 4 or 5 "affordable units" are projected to be about 100K less, which still is a million dollars for 1 bdrm! And when the real prices are revealed upon completion, even the so-called affordable units will be much, much more than a million. No one is getting a condo for just over a million dollars. Case in point: "s9uQoMadera," nearby, was projected to be going to rent for $2500/mo. for a 2 bdrm, which actually started renting for $8000/mo. instead!

Flying: How to lower your impact
By Sherry Listgarten | 19 comments | 3,236 views