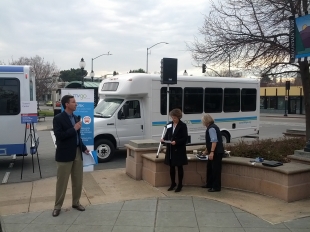 City Manager Dan Rich speaks to the gathering at the official launch of the city's new shuttle services on Jan. 9.

I wish the management team were taking a better look at how the shuttle runs.

I waited through two consecutive scheduled stops on Sylvan Drive just two days ago. Other riders report the same problem.

The schedule has never been reliable, so the shuttle is useful only for trips that are the most casual.

It also looks like management never checked to see whether the buses and the routes were compatible. These buses, as happily quiet and pleasant as they are, cannot complete their day's schedule. The range of these vehicles is too limited, and the buses need to recharge before the end of the day, not reflected in the schedule.

Management execution has been far from crisp, and problems linger that should be solved within a day.

If anyone had told the Mayor about the many problems, their would have been less fanfare last week. Everyone would have been occupied funding since new management to run the shuttle.

Jim Neal is a registered user.


I still believe that the city should have opted for the double loop route which would have provided much needed service along Shoreline Blvd instead of duplicating a lot of the existing VTA routes. I guess I'll still be walking to and from Safeway from downtown until I get my car again. It's not easy carrying 80-100 lbs that far.

Flying: How to lower your impact
By Sherry Listgarten | 19 comments | 3,217 views

My angst about the disaster of these two debates
By Diana Diamond | 28 comments | 1,569 views