Cavemen never had it so good | News | Mountain View Online |

Cavemen never had it so good 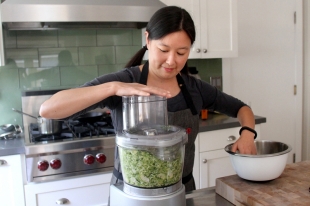 The "paleo diet" advocates eating whole foods and avoiding all grains, even whole grains and refined sugar. Food without grains and sugar -- is it palatable?

Palo Alto's Michelle Tam -- a lifelong food lover who has been known to prioritize culinary experiences over viewing world-renowned art while traveling -- and her husband Henry Fong have discovered that eating paleo food tastes delicious. And they can prove it.

Tam and Fong created a blog called "Nom Nom Paleo" that is award-winning and popular, to the tune of over a million views per month. They are also behind a successful iPad cooking app by the same name.

Tam and Fong will release a cookbook, "Nom Nom Paleo: Food for Humans," on Dec. 17.

The Paleo diet takes its name from the Paleolithic era, before the advent of agriculture, and models itself on the idea that modern humans will be healthier by emulating the eating habits of their hunter-gatherer ancestors.

For Tam and Fong, it's not just a diet, it's a lifestyle. Living paleo means eating whole foods, which are unprocessed and as nutrient-dense as possible, Tam said. Fong started eating paleo first, and Tam and their two children soon followed.

"For us, we are the middle-aged mommies and daddies, and we woke up one day and said, 'Where did this muffin-top come from?'" Tam said.

"Everything we thought was right (about our diet) led us to where we were," she said. "When I tried eating paleo, I noticed a stark difference in how I felt in terms of energy levels and mood. And my muffin-top went away!"

Before Tam started eating paleo, she said, she didn't often cook at home for herself or family. Her mother is an "awesome cook" and her sister is a professional chef, and she had easy access to great Bay Area restaurants. Now she cooks more often because it's hard to find the food she wants when she's out.

Through preparing paleo foods at home, Tam said she realized that cooking is a learned skill. "I didn't think of cooking like a skill that you have to practice, which it is," she said. "I used to think: 'It's not great. I'm not going to make this again.' Now I think, 'Next time ... '"

Fong said he has observed firsthand the evolution of Tam's cooking since she went paleo. Her culinary art, he says, has "developed into jazz." He watches his wife cook without recipes, improvising by "going to the fridge and picking and choosing what's on the shelves and throwing it together."

Inspiration for Nom Nom Paleo recipes sometimes comes from what's in the family fridge, Fong said. But sometimes it comes when the family eats out and notices novel flavor combinations on the menu. Other times, published recipes are what influences Tam. Rather than using her cookbooks while preparing food, she reads them in advance to get ideas on how other cooks put together various tastes, and then comes up with her own plan, Fong said.

Tam started the Nom Nom Paleo website three years ago, to share her recipes in a format that she herself would want to read.

"I've always loved reading food blogs, but I never thought I had anything new or different (to write about)," she said. "When I went paleo, there were just a few paleo food blogs, but I didn't think there was one that fit what I was looking for."

In three years, the website has won multiple awards. Tam said her most cherished award is from Saveur magazine, because it is a prestigious food-blogging award. "And she got an engraved (meat) cleaver out of it," Fong added.

Tam and Fong said the idea for the iPad cooking app came to the couple after Fong read an article about cookbooks of the future. "We were cooking with our tablet," Fong said, "and we live in Silicon Valley."

Fong added that he and Tam thought an iPad cooking app would be something different in a crowded cookbook market. They partnered with Y Media Labs, an application-development company in Redwood City, for creation of the app. Recent sales figures state that some 70,000 people have bought the Nom Nom Paleo iPad app.

Tam and Fong said they were not thinking about doing a cookbook until Andrews McMeel Publishing, headquartered in Kansas City, Mo., and famous for publishing cartoons such as Calvin and Hobbes as well as cookbooks, pitched the idea to them.

The website, app and cookbook are all collaborative efforts, Tam and Fong said, and the content of all three reflects what is important to them. They choose dishes that they themselves want to eat, rather than trying to please readers, Tam said.

The cookbook contains some recipes already published on the blog and in the app, but about half are new. While Tam creates and writes up the paleo recipes, Fong is primarily responsible for photographs, cartoons, layout and graphic design.

Tam said the cookbook also includes advice for cooking tasty paleo foods, such as a list of 20 cooking tips and ways to boost umami -- the "savory" taste -- in your food. The book is also personal, "almost our family scrapbook," she said. "It's the way we like to eat; it's our attitude towards food. We have a fun approach to food, and we want it to be delicious."

Both Tam and Fong said that taste is paramount in the recipes they publish: "It comes from Michelle saying 'I'm a foodie first and a paleo eater second,'" Fong said.

3 tablespoons melted ghee or fat of your choice (such as coconut oil, duck fat, lard, etc.)

1 tablespoon ghee or other fat

Preheat oven to 450 degrees with the rack in the middle position.

Thinly slice the sprouts lengthwise with a knife or mandolin, or with the slicing blade of a food processor. In a large bowl, toss the shredded sprouts, melted fat and salt.

Spread the shredded sprouts evenly on a foil-lined baking sheet. Bake for about 15 to 20 minutes, flipping and tossing every five minutes or until the spouts are nicely browned and tender.

While the sprouts are roasting, prepare the dressing. Melt the ghee over medium heat in a saucepan. When it's shimmering, add the ginger, shallot and garlic, and sauté until fragrant (about a minute).

Measure out the orange juice, Coconut Aminos, rice vinegar and fish sauce and pour it into the saucepan. Bring it to a boil and then lower the heat and simmer the dressing for five to eight minutes or until it's slightly thickened. Remove the pan from the heat, and stir in the sesame oil.

Once the sprouts are ready, take them out of the oven, and pour the sauce over the roasted sprouts. Sprinkle on the scallions, cilantro and sesame seeds and stir to combine. Serve immediately.

5-pound Boston butt roast (either bone-in or -out)

Line a six-quart slow cooker with three slices of bacon.

Blot the pork roast dry with paper towels and poke five evenly spaced slits in the pork with the tip of a paring knife. Tuck a clove of garlic in each slit. Sprinkle the salt all over the surface of the roast, massaging it into every nook and cranny.

Place the pork roast on top of the bacon in the slow cooker, put on the lid and cook the roast on low for 16 hours.

When the pork is finished cooking, transfer it to a large bowl. Shred the meat with two forks and adjust the seasoning with the braising liquid.

Do you want to have the same life span as cavemen had?

It is a myth that all cavemen died young. The problem with longevity statistics is they factor in infant mortality, and death rates were high for children and infants. So, the average lifespan for prehistoric man may have been 30 yeats, but that factors in all who died in infancy and childhood. Prehistoric man also lived in a time without modern medicine, and had to face off against predatory animals, lack of shelter, etc.

Now think about how these people eat versus how modern Americans eat. I am no "caveman" dieter, but I certainly believe that eating real, whole foods is much preferable to the processed food/fast food culture that is damaging the health of us "civilized," "modern" people.

According to this guide - Web Link - you have it right Jerry. Cavemen were virtually free of modern disease and died younger because of obviously worse medical care and a harsher environment.

Due to repeated violations of our Terms of Use, comments from this poster are automatically removed. Why?

The first few seconds after awakening; before I remember the virus
By Chandrama Anderson | 0 comments | 2,392 views

Can you Stay Healthy without Making More Trash?
By Sherry Listgarten | 2 comments | 1,688 views

Think about helping others in our coronavirus-affected area
By Diana Diamond | 2 comments | 1,545 views