Steins, Tied House and the Chamber of Commerce team up to bring Oktoberfest to Mountain View 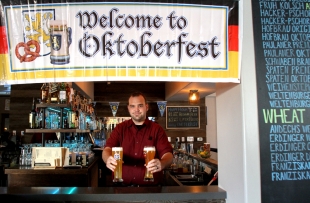 Cody Van Houten, a bartender at Steins Beer Garden and Restaurant in Mountain View, pours a Weihenstephaner Vitus Weizenbock, left, and Weihenstephaner Weissbier, right, a few of the many German beers on tap for Oktoberfest. Photo by Veronica Weber.

With 5,000 homemade pretzels and 13,000 liters of beer imported from Germany, Stein's Beer Garden & Restaurant owner Ted Kim hopes that Mountain View's new Oktoberfest will go out with a bang.

Kim and restaurant partner Albert Chang have teamed up with the Mountain View Chamber of Commerce and Tied House to create what Kim calls a "little mini-Munich" to celebrate Oktoberfest in Mountain View on Saturday and Sunday, Oct. 5 and 6, from 10 a.m. to 6 p.m. The event will take place in the parking lot behind Steins at Bryant and Dana streets.

"I just wanted to do an Oktoberfest just for Mountain View," Kim said. "And I wanted to make it very German, a very authentic German Oktoberfest, which I don't think happens at a lot of these other Oktoberfests," he said.

Kim and Chang connected with Tied House early on, enlisting its director of marketing, Carolyn Hopkins-Vasquez. Hopkins-Vasquez, who has planned previous beer festivals, said that Oktoberfest is just the start of what she hopes will be a fruitful relationship with Steins and the community.

"The main thing we want to do is establish our street, Villa Street, as a beer destination," she said. With Tied House, Steins and Jane's Beer Store, Villa Street is unusual, she added. "I can't think of any other street in the area that has so much of a beer presence."

Andechs, or Kloster Andechs Doppelbock Dunkel, is renowned in the beer world and is brewed by Benedictine monks who have been making beer since 1455. Andechs Abbey and its 3,500-seat beer garden is a place of pilgrimage for beer-lovers, and the monastery's brew hadn't left Germany until recently: It was first poured in the United States this June.

Mountain View Oktoberfest attendees will also see Weihenstephaner, which is brewed at one of the world's oldest breweries and, Kim said, makes "arguably the best Hefeweizen in the world."

Running parallel to the original celebration in Munich, many of these beers are currently on tap at Steins -- since Sept. 21, all 31 of the restaurant's taps were replaced with German beers. The German brews will be flowing until Oct. 6 or when they run out.

At the weekend Oktoberfest celebration, half- and one-liter steins will be on sale. There's no entrance fee; attendees can buy a stein for the day and then purchase drink tickets to try different beers.

The food will be served up by Esther's German Bakery, San Jose-based Teske's Germania and San Francisco-based street vendor and caterer The Butcher's Daughter.

Esther's is the event's pretzel provider, and its bakers had already started chipping away at the 5,000-pretzel goal three weeks prior, owner Esther Nio said. The pretzels will not only be consumed by attendees, but also fuel a pretzel-eating contest.

Esther's Bakery is hosting its own Oktoberfest in Los Altos on Saturday, Sept. 28, from 1 to 5 p.m. with a buffet of sausages; pork roast with crackling skin; sauerkraut; potato salad; red cabbage and rotisserie chicken; special Oktoberfest beer ordered from Hofbrau in Munich; a live band; and a free pretzel for anyone who comes dressed in lederhosen.

A huge circus-style tent will cover half of the parking lot, with umbrellas and long, communal tables on one side and a stage on the other where bands will perform. Big Lou's Accordion, a polka-style band, will perform on Saturday at 2 p.m.; the Joe Smiell Band will play Bavarian classics on Sunday from 11 a.m. to 2 p.m.; and the San Francisco German Band -- also known as Deutscher Musikverein -- will take over on Sunday at 2 p.m.

The German International School of Silicon Valley is also participating, with families volunteering and students performing.

Kim acknowledged Oktoberfest's reputation as a crazy, beer-fueled "brawl," but said he wants to get away from that. There will be kids' activities, such as a bouncy house and an arts and crafts table. "It's a community event," he said.

A portion of proceeds will also benefit the Chamber of Commerce's Student Outreach Advancement Resource (SOAR) program, which awards scholarships to local high school and community college students to encourage them to attend a four-year university, and to Can Do Multiple Sclerosis, a nonprofit that supports people with MS.

Oscar Garcia, president of the Chamber of Commerce, said the event speaks to the partnership and the collaboration that exists in Mountain View.

"When Steins opened, some people in the community thought, 'Oh my gosh, it's going to take business away from the Tied House.' They saw it as a competition. Here's an example of where they complement each other. There's room in this community for both -- and others as well," Garcia said.

It's the first event of this magnitude that Steins has been involved in, so he said he doesn't know what to expect. But he does know that they'll do it again.

"We're calling this the first annual because we really do want to make this a tradition and get people excited about it and make this one of Mountain View's ... like the Art and Wine Festival, something that people can look forward to."

Info: Oktoberfest is planned from Oct. 5 and 6 from 10 a.m. to 6 p.m. in the parking lot behind Steins Beer Garden & Restaurant, Bryant and Dana streets, Mountain View. The event is free, but attendees should RSVP online at mvoktoberfest.eventbrite.com/ or via the Evenbrite app. For more information, call 650-963-9568 .

The first few seconds after awakening; before I remember the virus
By Chandrama Anderson | 0 comments | 3,331 views

Can you stay healthy without making more trash?
By Sherry Listgarten | 6 comments | 2,742 views