Mountain View City Council appoints Emily Ann Ramos to fill vacant seat
As it neared 5 p.m. on Jan. 30, dozens of community members trickled into the Mountain View Council Chambers for a meeting... Last comment on Feb 2, 2023 at 11:11 am | 15 comments

An Alternative View
by Diana Diamond
Can the Memphis police behavior ever happen here?
Feb 1, 2023 | 31 comments

A New Shade of Green
by Sherry Listgarten
Doing more with the natural spaces we have
Jan 29, 2023 | 8 comments

"Fall color on Gretel Lane"
Several decades ago, someone decided to plant all of these trees on one street. On this day, with the afternoon sun's help, they gave us one beautiful fall color, not only in the trees, but through the snow-like leaves dusting over lawns and sidewalks, and into the street. Submitted by Jay Gonzales on Dec 5, 2011 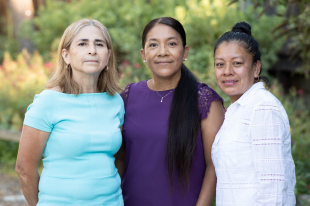 Plans are underway to break ground in the next several months on an educator-housing project in Palo Alto that was proposed more than five years ago. Several local school districts are involved, including Mountain View Whisman. Friday, 11:17 AM | 5 comments

On any given day, Avenidas Chinese Community Center is abuzz with older adults learning how to speak Mandarin, trying their hand at Chinese paint brushing or enjoying Lunar New Year festivities. Friday, 1:50 PM

The series of atmospheric rivers that hit California in December and January certainly improved the state's snowpack, state water officials confirmed during their second snow survey of the year. Friday, 10:45 AM 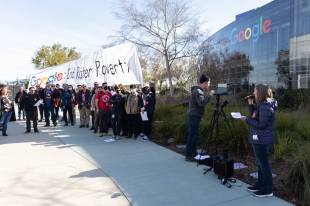 Google search quality raters demand fair treatment, deliver petition at Mountain View headquarters
Raters from across the country flew into the Bay Area to deliver a petition on Feb. 1 demanding that Google offer its search engine raters the same minimum wage and benefits that it promises its extended workforce. Thursday, 12:45 PM

Santa Clara County will close its mass COVID-19 vaccination and testing sites by the end of the month as they are no longer essential to the county's pandemic response, county officials said Wednesday. Thursday, 9:16 AM | 2 comments

Despite a federal deadline, California -- the largest user of Colorado River water -- has refused to cut back as much as six other states proposed in a new plan on Tuesday. Imperial Valley growers have the most to lose. Thursday, 9:17 AM | 1 comments

A child was attacked by a mountain lion in unincorporated San Mateo County, the Sheriff's Office announced on Tuesday. Thursday, 11:29 AM | 2 comments

Since a mass shooting on Jan. 23 that killed seven people on two mushroom farms in Half Moon Bay, roughly 40 residents who lived on-site have been staying in nearby hotels, with no estimate of when they can return. Tuesday, 2:14 PM

Tuesday was a busy day for the Mountain View Fire Department, which responded to 45 calls for service within a 24-hour period, including two fires that caused no injuries but thousands of dollars in damages. Wednesday, 11:44 AM

Woodland Library patrons now have the chance to visit the library, located in Los Altos, outside of its regular operating hours, as a result of a "open access" system that the facility is piloting. Wednesday, 1:28 PM

This week in community briefs, the family of 1992 murder victim Laurie Houts holds a free throw contest in her memory, CHAC announces a new executive director and the Rotary Club puts on its annual all-you-can-eat crab feast. Wednesday, 12:24 PM

As it neared 5 p.m. on Jan. 30, dozens of community members trickled into the Mountain View Council Chambers for a meeting with just one item on the agenda: filling the council's vacant seat. Five hours later, Emily Ann Ramos had it. Tuesday, 10:25 AM | 15 comments

Mountain View police are asking for help in identifying a man accused of groping a woman in the 1900 block of California Street on Jan. 20. Monday, 4:25 PM

Stanford scrutinized over deputy who drew gun on Black man

Stanford police are receiving scrutiny after an officer drew a gun on a Black driver over the weekend, an incident that has gained national attention following a viral Twitter thread from a witness. Tuesday, 1:05 PM | 2 comments

Expert tips: Grow veggies like the ones at Filoli estate

Coastal farmworkers eke out a living amid hardship

View past issues and special publications