The event is part of the Peninsula Open Space Trust's Wallace Stegner Lecture series, which features "writers, thinkers and activists who explore important issues related to land, nature and conservation." 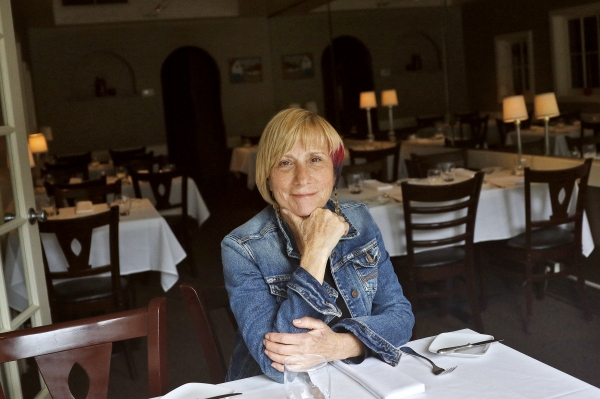 Flea St. Cafe owner Jesse Ziff Cool will talk about sustainability and other issues with José Andrés on April 6. Photo by Veronica Weber.

Andrés — as well as Cool, the owner of Flea St. Cafe in Menlo Park — is a staunch advocate for sustainability in the restaurant industry. His new book, "Vegetables Unleashed," explores cooking with vegetables to reduce food waste and the world's carbon footprint.

World Central Kitchen has for over a decade served meals to people in need and responded in the wake of natural and manmade disasters, including when Hurricane Maria hit Puerto Rico, the bushfires in Australia and in 2020, the pandemic. Since last March, World Central Kitchen partnered with restaurants to keep them and their employees afloat while serving 36 million meals in more than 400 cities across America.

Cool, who's championed farm-to-table, organic cooking at Flea St. Cafe for four decades, is also a culinary lecturer at the Stanford University Department of Education and uses her home garden and kitchen as a model classroom. Cool spearheaded an effort to revamp the food Stanford Hospital serves employees and patients.

During the coronavirus shutdown, Flea St. Cafe launched "Meals of Gratitude," a program to donate meals to frontline health care workers while keeping the restaurant staff employed. The restaurant has made 29,000 meals for frontline healthcare providers, evacuees from the California wildfires (Flea St. also sent meals to wildfire victims through World Central Kitchen) and vaccination site employees. A year after starting the program, Cool is ending Meals of Gratitude at the end of this week as the restaurant works to slowly reopen.

The April 6 talk begins at 7 p.m. For more information and to buy tickets, go to openspacetrust.org.

Cool is also speaking on a separate panel this month about pay equity and her work to eliminate tipping at Flea St. Cafe, hosted by Les Dames d'Escoffier International, a philanthropic organization of women leaders in food, beverage and hospitality. The virtual event is on Wednesday, March 24 at 4:30 p.m. Tickets are $10. To register, go to lesdamessf.org.

Through the two events, Cool will explore "some of the dramatic opportunities and change that has been a part of all our lives over the last year, and what it means for the road ahead," she wrote in the restaurant's newsletter this week.